Montini got out to a 21-7 lead, but wasn’t able to sustain it as Sacred Heart-Griffin put together a furious comeback to end the Broncos’ quest for a fifth consecutive state title, by winning 38-28 Saturday at Huskie Stadium. 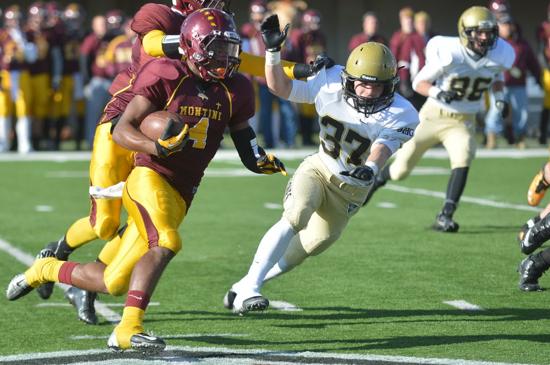 But it was more than enough to end Montini’s dream of capping a five-peat with its first unbeaten season.

Sacred Heart-Griffin stormed back from a 14-point first-quarter deficit to beat the No. 2 Broncos 38-28 Saturday in the Class 5A final at Huskie Stadium.

A pass-first team all year en route to setting a state scoring record with 744 points (53 per game), Sacred Heart hit the reset button and rallied behind a running game that piled up 268 yards and five touchdowns. Quarterback Gabe Green ran 26 times for 145 yards and three scores, while Anthony DiNello had eight carries for 66 yards and two touchdowns.

Montini (13-1) set title-game records for passes thrown by a team (60) and a player (56 by Alex Wills). But the Broncos didn’t score between the last minute of the first quarter and the final minute of the game as Sacred Heart ran off 31 straight points.

“That’s definitely the most pressure I’ve seen,” said Wills, who finished 23 of 56 for 316 yards and one touchdown with one interception. “They saw some weaknesses in our offensive line. We made adjustments, but they capitalized on them.”

That came after the Broncos scored on their first two possessions, getting a five-yard touchdown run by Wills and a 12-yard TD pass from Wills to Connor Costello.

Sacred Heart (14-0) got on the board with DiNello’s first touchdown run, a one-yarder with 25 seconds left in the first quarter. Derrick Curry ran the ensuing kickoff back 82 yards for the score, but then things fell apart for Montini.

Green’s 56-yard touchdown run early in the second made it 21-14 and Montini couldn’t convert on a first-and-goal at the Cyclones 4-yard line at the end of the first half. A 12-yard sack by Chris Overton pushed the Broncos back to the 15 and Montini was unable to get its field-goal team out before time expired.

“We just couldn’t seem to get a hold of the game today for the first time in a very, very, very long time,” Montini coach Chris Andriano said. “Their defense did a nice job of disguising some things. Our quarterback wasn’t in a rhythm. ...

“We left some big plays on the field.”

Sacred Heart pulled within 21-17 on Kenny Rowe’s 39-yard field goal early in the third quarter and went ahead 24-21 on Green’s 17-yard touchdown run at 4:54 of the third. Green scored again from six yards out late in the period and DiNello’s 27-yard touchdown run with 2:44 left clinched. Montini finally ended its drought on backup quarterback Charles Norgle’s one-yard scoring run in the final minute.

“This one is a sweet one,” said Sacred Heart coach Ken Leonard, who has four titles since 2005. “We wanted to show everybody — no offense to Chicago folks — there is football played south of I-80.”