Raequan Williams turned in a complete performance with eight points, nine rebounds, three blocks, and two assists to lead Gordon Tech to a 41-32 victory over Von Steuben in the Team Rose Shootout at Curie on Sunday. 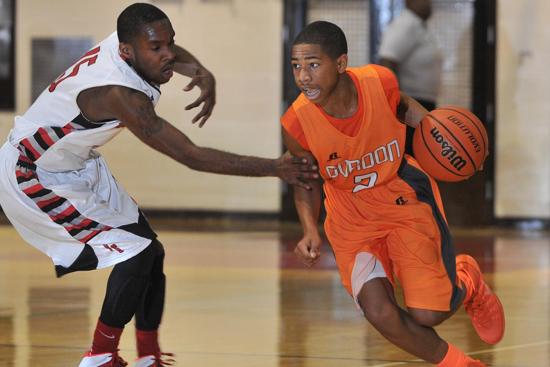 On a team marked by youth, Raequan Williams constitutes an elder statesman at Gordon Tech.

The 6-6 junior and two-year starter is the centerpiece of the Rams' attack and he showcased his skills at both ends by collecting eight points, nine rebounds, three blocked shots and two assists as the Rams defeated Von Steuben 41-32 in the Team Rose Shootout Sunday at Curie.

With Williams and 6-5 junior David Holiday anchoring the backline, Gordon Tech limited the Panthers to just one basket in the first half in running out to a 24-11 advantage at the break. Williams' bulk and strength and Holiday's length continually forced Von Steuben's players to alter shots in the lane or around the basket.

"The coach [Tom Kleinschmidt] named me a captain, so he obviously thinks of me as one of the leaders," Williams said.

"With David, we want to be two of the most physical post players in the city, and we just wanted to contest shots and not let them get anything easy. I spent a lot of time working on my footwork, getting good position for rebounds and challenging shots, and you saw that out there."

Gordon Tech (3-1) has three freshmen in its rotation. Freshman point guard Michael Johnson scored 10 points and added three assists for the Rams. Another freshman guard, Octavius Parker, scored five points in the second quarter. He drilled a three-pointer just before halftime for the Rams' 13-point edge.

Gordon Tech led by as many as 16 points (32-16) in the third quarter before Von Steuben senior guard David McDaniel caught fire and singlehandedly put the Panthers (0-2) back into the game.