Tevin King helps Providence-St. Mel hold on for a win against Farragut

Tevin King scored 17 points and keyed a late run to help Providence-St. Mel hold off Farragut for a 65-58 victory at the Team Rose Shootout on Sunday at Curie. 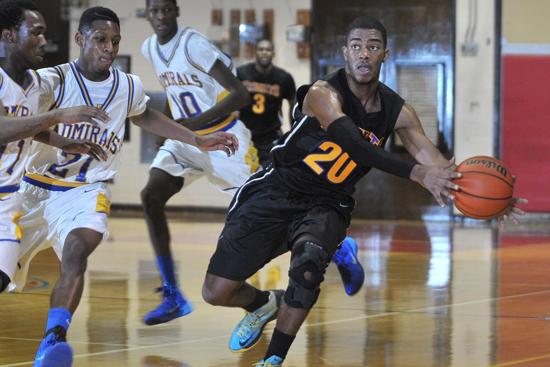 It may be early in the season but it has been a tough three game stretch for Provident-St. Mel.

The Knights played two games Saturday at the Rockford Classic, including the night cap, before playing Farragut on Sunday in the Team Rose Shootout.

Josh McNeil led three players in double figures with 19 points, Tevin King added 17 and Bernard Lilly, Jr. had 16 as Providence-St. Mel had just enough left in the tank to beat the Admirals 65-58.

"We found a way to weather the storm and get out with a victory against a tough hard-nose team like Farragut," Providence-St. Mel coach Tim Ervin said.

Free throws played a major factor in the game as the Knights went 22-for-28 from the free-throw line and Farragut was 10 of 23 from the charity stripe.

"I told the team that this was going to be a very physical game and they had to handle the ball and knock down the free throws," Ervin said.  "We did an exceptionally good job on both ends. These are the type of games you want early in the season to find out how your team is going to respond. We had a good test yesterday and followed that up with a very nice win today."

Farragut coach William Nelson had an opposite perspective on his team's performance.  "Yesterday we got lucky and got out with a win after shooting less than 50 percent from the free-throw line," he said.  "Today it caught up with us. We better change this real quick or it is going to be a tough year."