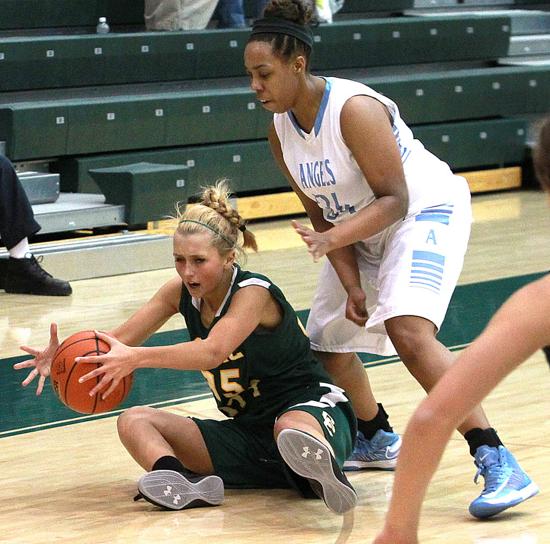 The challenge was obvious for Peotone entering the season. The Blue Devils lost 80 percent of their scoring from last season, including the team’s top five scorers.

Who was going to step up?

“I said before the season that we’ll be a team that gets better week to week,” coach Steve Strough said. “I really like the layout of our team. We’ve got a team of basketball players.”

After finishing in second place in the Beecher Tournament, the Blue Devils were 4-2 heading into Monday’s home game against Herscher. Strough’s squad has only one senior in the rotation, but the development is getting there.

Peotone depends on its guards to mix it up in the lane. Carstens is averaging a team-best 11 rebounds per game, Graffeo 7.7 boards per game.

If there is a key for Strough’s squad, it’s another player stepping up to take the offensive pressure off Carstens and Graffeo in the tough Interstate-8.

“We need that third scorer, someone to hit the open shot,” Strough said. “If that happens, we can really get rolling. We’ve got to get better defensively, but we’ll get better with experience. I like where we’re at.”

Joliet Catholic defeated Hillcrest 81-70 on Nov. 25 at the Rich South Tournament, but coach Ed Schodrof expected more from his team.

“I was furious. I didn’t think we played well defensively at all,” Schodrof said. “The coaching staff, we blasted the team after the game. We weren’t where we needed to be.”

The message was effective. The Angels rolled over Bishop McNamara 85-46 in a revenge game to win the tournament, then won two games at the Tennessee Turkey Jam Tournament in Murfreesboro, beating Jefferson Davis (Ala.) 67-47 and Macon County (Tenn.) 67-40.

Britta Spelde, of Coal City, is the Herald-News Girls Basketball Player of the Week.

Spelde, a senior forward, was named tournament MVP at Beecher, scoring 14 points in the championship win over Peotone and 18 the team’s semifinal victory over Tinley Park.