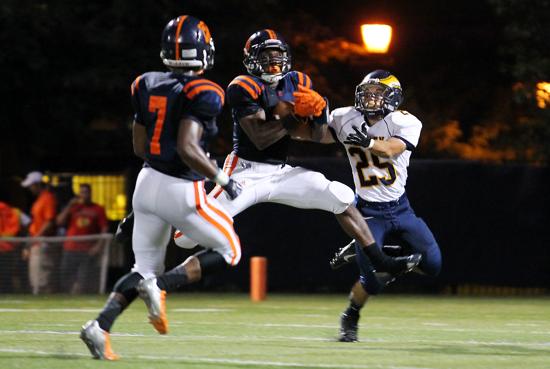 Sr. DL, Loyola: At 6-foot-2 and 250 pounds, he was a major force in the middle for a defense that had four shutouts and allowed only 12 points a game. Pontarelli and the defense didn’t surrender a TD in the Class 8A state final.

Sr. DL, Maine South: The CSL South’s defensive player of the year also was selected to the Class 8A all-state team. The 6-0, 235-pounder had 15 tackles for loss and 11 sacks to help the Hawks get to the quarterfinals in Class 8A.

Sr. DL, Nazareth: The 6-5, 260-pound Purdue recruit totaled two and one half sacks and six tackles for loss for the Roadrunners.

Sr. DL, Barrington: The MSL West’s defensive player of the year and a Class 8A all-stater, Castagna (6-4, 230) terrorized offenses from his end position. He totaled 20 tackles for loss, 16 sacks, four forced fumbles and four blocked punts.

Sr. LB, Lake Zurich: Moskal was the headliner for the Class 7A runner-up Bears, who posted four shutouts and surrendered only nine points a game. The 6-2, 215-pound Syracuse recruit and all-state selection had 10 tackles for a loss, two sacks and two forced fumbles.

Sr. LB, Loyola: Cerney (6-0, 210) was the quarterback of the defense at middle linebacker, leading the team with 123 total tackles. He also had five sacks, including one in the Class 8A title game.

Sr. LB, Lake Forest: The 6-1, 224-pound outside linebacker was a Class 6A all-state selection after totaling 12 tackles for a loss and eight sacks. He has verbally committed to Colgate.

Sr. DB, Stevenson: Expectations are high in the Morrissey household, and the 6-3, 195-pound Michigan State recruit  lived up to his family’s football name. Morrissey, whose father Jim Morrissey won a Super Bowl with the Bears, was a standout on both sides of the ball for the Class 8A semifinalists. An all-state selection, Matt Morrissey — the Pioneer Press Defensive Football Player of the Year — totaled 94 tackles in 11 games, along with five pass break-ups, four interceptions and three tackles for loss.

Sr. DB, Lake Zurich: A big part of the Bears’ dominant defense, the 5-9, 175-pound safety finished the season with nine pass break-ups, three tackles for a loss, one interception and one forced fumble. He was named to the Class 7A all-state team.

Sr. DB, Oak Park-River Forest: A lockdown cornerback at 5-9 and 187 pounds, Baggett was one of the best in the state at his position. He was a player who could take away half of the field.

Sr. DB, Notre Dame: The 5-11, 175-pound safety was a playmaker in the secondary. He finished with 59 tackles (three for loss), four forced fumbles, two fumble recoveries and two interceptions.

Sr. P/K, Highland Park: Pollack (5-11, 175) was a weapon for the Giants on both sides of the ball who was able to make all the kicks on offense and change field position as a punter. He has verbally committed to Arizona.

Jr. Athlete, Stevenson: A Class 8A all-state selection, the 6-3, 195-pounder was a threat to score every time he touched the ball. He caught 48 passes, totaling 890 yards and eight touchdowns. He averaged 24.5 yards per kick return.