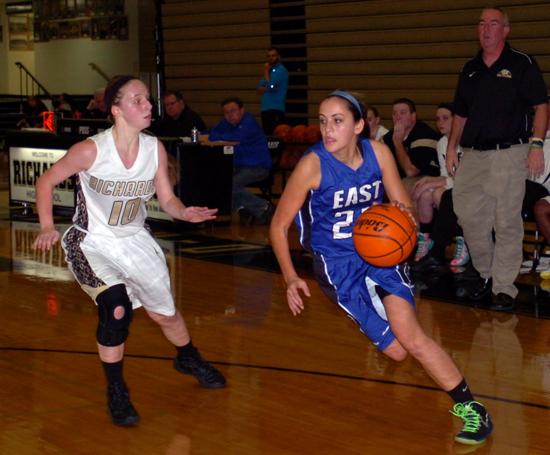 One thing working in the team’s favor was having nine players back from the 2012-13 team that went 14-16 and lost in a regional final. With a 4-2 record entering Monday’s home game against Plano, the puzzle pieces are there.

“I think we’re showing a lot more patience than we did last year,” Beck said. “We’re moving the ball and waiting for an open look. We are struggling at times just to get that offense going. Once it does, we’re all right.”

Through the early portion of the season, the patience has paid off for Seneca, especially at the offensive end. Danielle Hauch is averaging a team-high 11.3 points per game, while Mallory Misener, Jacey Lamboley and Anna Baker all are averaging more than 7 points per game for the Fighting Irish.

If there are weakness, they’re easy for Beck to see.

“We’ve got to hit the boards, plain and simple,” Beck said. “Make some more free throws. Hit them, it keeps that game a lot closer.”

When it comes to athletics, there isn’t much Peotone’s Emily Carstens can’t do. A guard on the basketball team, she is averaging 12.6 points and 10.6 rebounds.

As a sophomore in the spring, Carstens finished with 17 home runs, 59 RBI, a 13-1 pitching record, 0.80 ERA and 133 strikeouts. She recently committed to Olivet Nazarene to play softball.

The 5-foot-9 junior also is talented musically. She played “The Star-Spangled Banner” on a flute before Peotone’s 55-48 win over Seneca.

“I asked Mr. Rusek, our band director, my freshman year, ‘Can I try the flute at some home games?’ ” Carstens said. “I asked him if he needed me any time last week, and he said, ‘Thursday, go ahead.’ ”

Kara Krolicki, of Lincoln-Way East, is the Herald-News Girls Basketball Player of the Week.