Ramblers wrestlers motivate each other to be better on the mat. 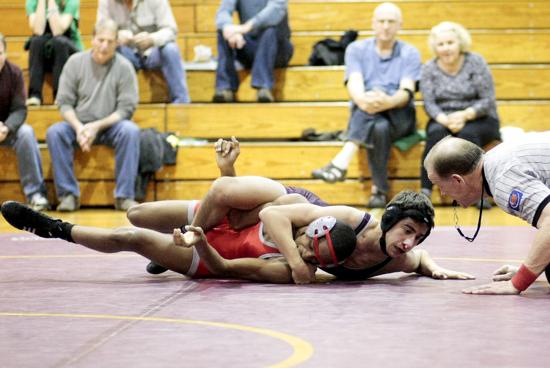 The takedown has been a big move for Loyola this season, and two Ramblers are on pace to make program history.

The school’s career takedown record dating back to 2005 stands at 200. It was established by Pat Dougherty, who earned the mark in 2010 as a senior.

Couri, a 132-pounder, already has 188 career takedowns and is poised to break the record this weekend at Glenbrook South’s invitational. Wosick, who wrestles at 182 pounds, is right behind him. With 54 takedowns this season, he could get close to the all-time number sometime next season.

“It’s kind of like an inside joke between Nico and I,” Wosick said. “We’re just trying to motivate each other and push each other a little harder to wrestle that much better.”

Couri recorded 72 takedowns as a junior, but he already has 65 takedowns this year.

“I’ve never done that before,” Couri said, “and that’s just because Ryan’s pushing me.”

Thanks to the takedowns, both wrestlers have been successful for the Ramblers. Couri entered this week 14-4, while Wosick came in at 19-2. They are first or second in most statistical categories for Loyola, according to coach Chris Stephens.

Couri is a team captain, and he said he tries to outwork everyone in practices, including finishing first in wind sprints. Wosick will constructively critique teammates who ask for assistance and will stay after practice to help Loyola’s youth wrestling program. With fall sports like soccer and football bleeding into wrestling season, Wosick stepped up in terms of leadership when other wrestlers weren’t around.

“Wosick was the more senior person in the wrestling room for awhile there,” Stephens said. “He’s a good leader and role model for those younger guys.”

Despite sharing a knack for the takedown, Couri and Wosick have differing wrestling styles. Couri is known for his agility and aggressiveness, and he likes to set the match’s tempo.

Wosick said he lets the action come to him.

“I try my best just to work with what they give me,” Wosick said. “I don’t really want to force anything out there, so I try to work off whatever they do, and work off their reaction. I think that allows me to open things up better and allow me to flow better.”

Both wrestlers finished third at Prospect’s invitational this past weekend, each losing matches in overtime. Both are expected be in the field Friday and Saturday at Glenbrook South, and both said they are confident that their best efforts can get them far in the tournament.

“I was mad that I wasn’t able to do that in the Prospect tournament,” Couri said of capturing the championship. “So, I’m definitely going to go in there more motivated to take first.”