Luwane Pipkins scored 34 points as Bogan overcame an 11-point first half deficit to earn a 63-52 victory over Farragut on Saturday. 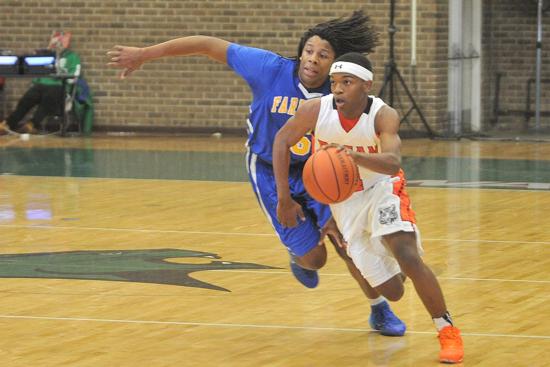 Not too many teams can deal with Bogan's vaunted three-guard attack led by high scoring point guard Luwane Pipkins, but Farragut gave the No. 15 Bengals all they could handle on Saturday at the CPS Holiday Showcase at Chicago State.

Bogan, still riding high from its emotional Red-South victory over Morgan Park on Tuesday, were able to hold on for a 63-52 victory.

The Admirals jumped out to an early lead and led 28-17 with 1:17 left in the first half.  Pipkins scored eight points in the final 47 seconds of the second quarter on a steal and a basket, a three-point play and a pull up three-pointer to cut Farragut's lead to 28-25 at halftime.

A three-point play and a lay up by Joshua Adams, and a steal and lay up by Micheal Myles allowed Farragut to cut the Bengals lead to 49-47 with 5:05 remaining in the game.

Bogan was able to push the lead back to ten points with 1:23 remaining and four free throws down the stretch by Pipkins allowed the Bengals to close out the game.

Pipkins led all scorers with a game high of 34 points, while James Jones added ten.

"The team under estimated Farragut. They caught us by surprise,'' Pipkins said. ''They were physical and scrappy and jumped out on us. Coach pulled me over and told me to pick it up and I just got us going. The team just followed my lead."