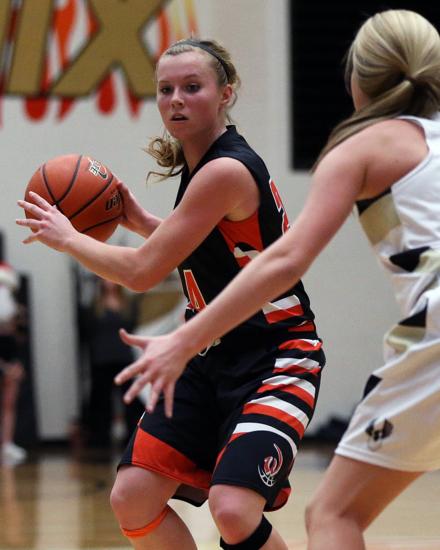 The challenge was going to be obvious for Romeoville coach Julio Carrasco.

The Spartans lost eight of their top 10 players from last season, including the entire starting lineup, from a team that won a conference title and its first regional since 1989.

There was nowhere to start but the ground up.

“We’re trying to rebuild, refuel more or less,” Carrasco said. “We’re going back and forth on the ups and downs right now so we’ll see how that goes. All we want is hustle and heart. The girls are playing and running the offense, and I want them to work hard.”

Looking to replace almost the team’s entire scoring load from last season, the Spartans started off the season an impressive 4-2 but have hit a bit of a rough patch since, losing five straight games including a 44-30 defeat to Richards at the Oak Lawn Holiday tournament’s seventh-place game.

Any win is a good win though, Romeoville hopefully using this season as a jumping off point for future success. The potential to build is obviously there without a single senior on the team. The Spartans backcourt is especially young, freshman Alexis Marin starting at point guard and sophomore Skye Osborne at shooting guard.

“Alexis is doing a great job, and she’s like Abby Smith (now at McKendree University) was as a freshman,” Carrasco said. “She can’t open up her mouth yet. We saw what Abby did with her four years and for now, it’s us trying to find that leader. That’s what is hurting us.”

With the season a month in now, Carrasco has identified a leader stepping up as something that could make or break the team over the coming months. Who wants to step up?

Osborne and junior Faith Heitman are both strong possibilities for the Spartans.

“Fait and Skye have both stepped up,” Carrasco said. “Skye is just a hustler defensively. She’s a sophomore, but I can envision her as a team leader with her hustle. We need to find that one person.”

The Spartans took their 4-7 record into Monday’s Bradley tournament.

Dani Morgan, of Lincoln-Way West, is the Herald-News Girls Basketball Player of the Week.

A sophomore guard, Morgan scored 20 points in West’s 54-51 win over Lasalle-Peru and 28 points against Morris in a 70-55 victory to help the Warriors to a 2-0 start at the Ottawa Tourname