St. Charles North used a combination of guard and post play to defeat Bloomington 73-69 in the first round of the Pontiac tournament Thursday. 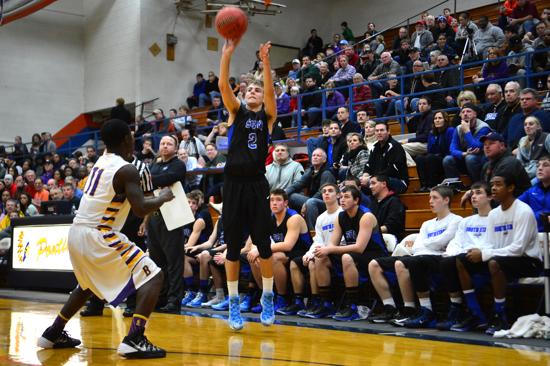 PONTIAC, Ill. — St. Charles North’s roster is loaded with size. Size of the vertical and horizontal variety. The North Stars have five players over 6-4, all of them beefy and several of them football players.

“They aren’t typical basketball players but they play with so much heart,” said North Stars senior Jake Ludwig. “They can make layups. They deliver when they get the ball down low.”

Ludwig and senior Alec Goetz roam the perimeter and handle the bulk of the scoring. That combo of sharp-shooting guards and rock tough big men helped the North Stars knock off a significantly more talented Bloomington team 73-69 Thursday in the first round of the Pontiac Holiday Tournament.

Camden Cotter (six points, seven rebounds) and Garret Johnson (11 points, eight rebounds) did most of the damage in the post for St. Charles North (7-3). The North Stars out rebounded Bloomington 46-37. Ludwig scored 20 and Goetz had 17.

Ludwig scored seven points in the final minute to seal the win for St. Charles North. He had made four consecutive free throws before being called for lane violations on his final two free throws. They were crucial misses, with the North Stars clinging to a five-point lead.

“That was embarrassing, I need to figure out what I did wrong there,” Ludwig said.

While several of Bloomington’s talented players seemed to lose focus throughout the game, senior guard Antonio Sims (25 points) was a rock.

“He was on fire,” said Ludwig. “The three he made after doing the 360 turn just showed how hot he was today.”

St. Charles North will face Simeon in the second round on Friday.

“We’ve been thinking about that game, for sure,” said Ludwig. “How could you not be excited about it?”