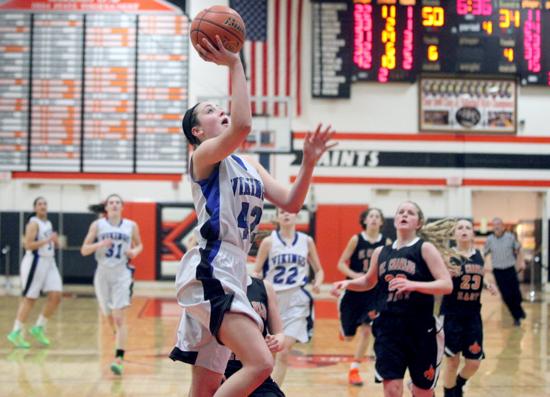 Geneva's Abby Novak scores off a turnover as the Vikings pull away from St Charles East on Thursday, Feb. 14, 2013. | Donnell Collins~For Sun-Times Media

No matter what the records are, in recent years, the litmus test of Little 10 Conference girls basketball, and Class 1A girls basketball in Northern Illinois, has been Hinckley-Big Rock against Newark.

Newark’s startling comeback Friday, a 15-3 run to end the game and cap a 39-34 win, gave the Lady Norsemen the early control of conference play.

Despite having a new coach, with Brian Holman replacing the retired Dale Skelton, and a new starting lineup after last year’s 28-2 dominance, Newark is off to an 11-5 start overall and a 5-0 start in the Little 10.

“It was a slow start at the beginning because we were young, but we’re starting to round into form and starting top play better,” Holman said.

Newark will be looking to run through the Little 10 unbeaten as it did last year. The Lady Norsemen followed that up with a regional title before falling to the eventual third-place team in Class 1A Annawan, who coincidentally knocked out Hinckley-Big Rock in the sectional finals one game later.

“I definitely felt like we had this in us because we have a lot of talent for how young we are,” said senior Kristine Zitt, who led Newark with 16 points and 10 rebounds against H-BR. “We’ve come a long way from where we started, so it’s definitely good to see us all come together.”

Newark has already knocked off two of the conference powers in Hinckley-Big Rock and Serena. A crucial date with an improved Indian Creek squad awaits Saturday at 4:30 p.m.

Batavia and Geneva have each played tough schedules this season, and it will continue next weekend at the 24th annual McDonald’s Shootout at Willowbrook.

The schedule for the Chicagoland Girls Prep Classic has been announced. Geneva will take on Champaign private school St. Thomas More on Jan. 18 at 3 p.m. Batavia will face Joliet Catholic on Jan. 20 at 1:30 p.m. All told, 35 schools from three states will participate in the three-day event.

Due to the extreme cold, the holiday break was extended for a couple of days, which caused a handful of local contests to be postponed and rescheduled.

As of press time, the games between Hinckley-Big Rock and Lisle, Minooka and Oswego East, Oswego and Romeoville and Marian Central and Aurora Central Catholic have no makeup date listed.

Two of Tuesday’s cancellations have been rescheduled, however. Chicago Christian will visit Rosary at 7:30 p.m. on Jan. 30 and Yorkville will play at Kaneland at 7 p.m. on Feb. 10.