Unlike most 6-7 small school basketball players, Harvest Christian’s John Vislisel thrived more with his outside shooting than near the basket in the past. This year he has been going inside and his shot selection has landed him a 23.8 point average. 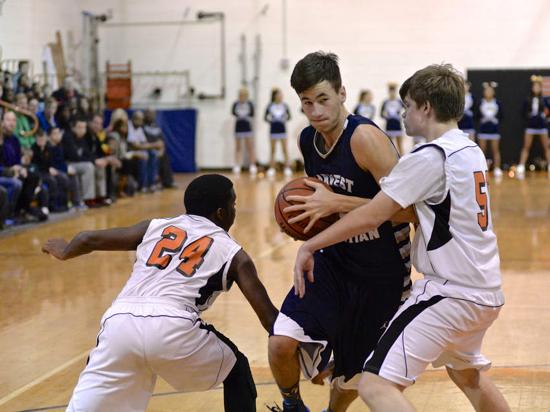 Unlike most 6-7 small school basketball players, Harvest Christian’s John Vislisel thrived more with his outside shooting than near the basket in the past.

To explain it, he sheepishly held up one of his arms and laughed.

“Growing up, I’ve always been skinny,” he said. “So it’s kind of hard. I’d go inside and get hit a lot, so I just tended more to the outside.

“This year I have been working at getting inside and trying to get that touch in short, then going outside.”

Vislisel’s better shot selection variety had landed him atop the area scoring leaders chart until St. Charles East’s Dom Adduci got there with a 40-point effort against Elgin.

Vislisel is averaging 23.8 points and 7.9 rebounds per game for a 7-7 Harvest Christian team that takes a five-game winning streak into a Friday night Northeast Athletic Conference showdown at home against next-door rival Westminster Christian.

Vislisel got himself ready for this season in a unique way — at least unique in terms of 6-7 athletes and basketball players. He ran on the cross country team for the first time, and helped lead the Lions to their first trip to state.

“Cross country was mainly to build leg strength, quickness, keep endurance up,” Vislisel said. “But we had a great season.”

He quickly found he wasn’t running just to stay in shape as his competitive instincts came to the front.

“It does come pretty quickly,” he said. “It’s fun to be able to excel and win at both sports.”

The basketball team’s winning streak after a 2-7 start has a lot to do with the entire team building off Vislisel’s success.

“It’s getting the ball in everybody’s hands and getting the defense spread out,” he said. “That way we can attack more efficiently.”

Some coaches might not find having their big man standing outside firing jumpers as the best way to build an attack.

“I don’t mind him going outside and taking the jumper there sometimes because when he’s hitting it — and I know he can hit it pretty consistently — then he’s dangerous,” coach Jeff Boldog said. “If he’s hitting threes, and he can work inside, then it’s really difficult to guard him and it opens up the other guys.

“But this year I would say he’s letting the game come to him more rather than just forcing it. Last year he forced a lot of crazy shots and he’s being more selective and patient.”

Vislisel would like to go from being the big fish in the little “Class 1A” pond to playing college ball, but knows it’s not easy making such a jump.

“I want to, but we need to work on getting me that exposure because it’s hard being at a small school,” he said.

Hitting the jumpers like he has — from both inside and outside — is one sure way to solve the problem.