News and notes from the Aurora area, including how you can help out the family of Sandwich principal and former Morris assitant wrestling coachMitch Nystedt, who is in a rehabilitation facility recovering from a massive stroke last June. 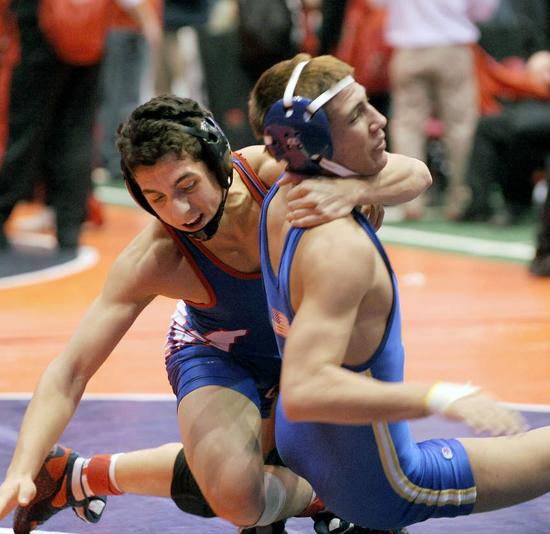 One visit to the Mitch Madness website and you understand quickly how much Mitch Nystedt means to Sandwich High School and the people of Morris.

Nystedt is the principal at Sandwich and on June 7, 2013 he suffered a massive stroke and has remained hospitalized ever since. Nystedt’s wife, Wendy, and their three children are hoping that after one more surgery and a stay at a rehab facility in Omaha, Nebraska, Mitch can come home.

“His family right now is doing as best they can. It’s hard not having him at home,” said family friend and Morris teacher Dave Auwerda. “It’s tough on them and they’re doing the best they can.”

Auwerda has helped spearhead Mitch Madness, a series of fundraising efforts aimed at helping the Nystedt family meet the costs of retrofitting their home once Mitch is able to return.

On Saturday at this year’s Interstate Eight Conference wrestling tournament at Sandwich, volunteers for Mitch Madness will be selling T-shirts and wristbands, promoting upcoming benefits, and selling tickets for the raffling off of a John Deere riding lawnmower.

Nystedt was an assistant wrestling coach at Morris from 1994-2003 and became principal at Sandwich in 2006.

“He’s always been one to help at all the wrestling meets and tournaments, and he obviously has a wrestling background,” said Lon Gerrish, dean of students at Sandwich. “The kids here absolutely love him. He’s such a people person and big cheerleader for all of our kids, not just the athletes. That’s really what stands out about Mitch.”

There’s only so much you can do in the face of forfeits.

No. 4 Marmion won 40-30 in a dual meet against No. 10 Mount Carmel on Jan. 16, despite forfeiting four weight classes to the Caravan due to injury. Of the 10 remaining bouts wrestled, Marmion won nine of them.

Two days later the Cadets took on an even tougher foe in No. 3 Montini. Over the past five years, Marmion and Montini have developed a heated dual-meet rivalry and this year’s dual met the standard.

Montini won 36-28 over the Cadets, with Marmion forfeiting three weight classes and Montini forfeiting one. Each team won five of the 10 bouts wrestled but it wasn’t quite enough for Marmion to overcome the built-in 12-point deficit.

Marmion’s Johnny Jimenez, three-time state champion and top-ranked in Class 3A at 126, won a 7-2 decision over Dylan Duncan, ranked third in 2A. The Cadets also got a pin from Anthony Cheloni at 132, major decision wins from Trace Carello (152) and Josh Meyers (182) and an 8-2 decision win for AJ Jaffe (120) over Montini’s Kegan Calkins.

Ranked second in Class 1A by Illinois Matmen, Plano (24-7 in duals) placed fourth at the Princeton tournament on Jan. 11 and got a look at No. 1 Dakota in the process.

Senior West Brown, ranked No. 1 at 160, improved to 27-1 in winning his second tournament title of the season, with a 3-1 overtime decision over No. 2 Brady Rude of Newman. Brown won 4-3 over Rude in a match earlier this year.

Top-ranked unbeaten senior Derrick Maisonet (28-0) also won 3-2 over No. 2 Daniel Zimmerman of Dakota on the title mat at 195.