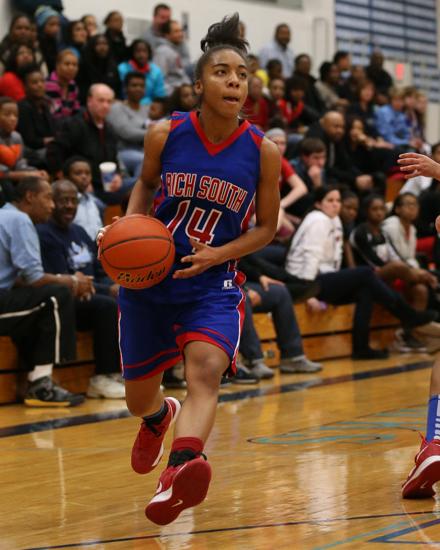 1. Rich South’s Tierra Webb is getting it done on the court and in the classroom. The 5-8 junior shooting guard, a Sun-Times all-area honorable mention as a sophomore, is just 66 points shy of reaching the 1,000-point mark. Scouts marvel at her ability to make the pull-up jumper or hit from beyond the arc. She can also find the open teammate when the defense collapses on her. Another place where Webb excels is in the classroom, where she ranks fifth in a class of 253.

2. West Chicago coach Kim Wallner recently registered her 400th win, and playing Neuqua Valley last week allowed her to reminisce about one of those wins when her team upset Mike Williams’ eventual state runner-up during a regular- season game in 2001. ‘‘Their team this year reminds me a little bit of that 2001 team,’’ said Wallner, who is 402-371 in 28 years. ‘‘I don’t know if it was an upset. I had a pretty nice team (27-4) that year, too. I was joking with [Williams] a little bit that we got him that year.”

3. Former Morgan Park coach Thomas Johnson has taken over as coach at South Shore International, where the Lady Tars are 17-4 and champions of the Blue-South division. Johnson starts three freshmen – Cymone Goodrich, Kennedy Perry and Leah Sims – and two juniors. ‘‘The sky’s the limit,” Johnson said. ‘‘I’m looking to make a little noise next year.” Ironically, by winning the Blue-South, South Shore International will move up into the same division as Morgan Park next year.