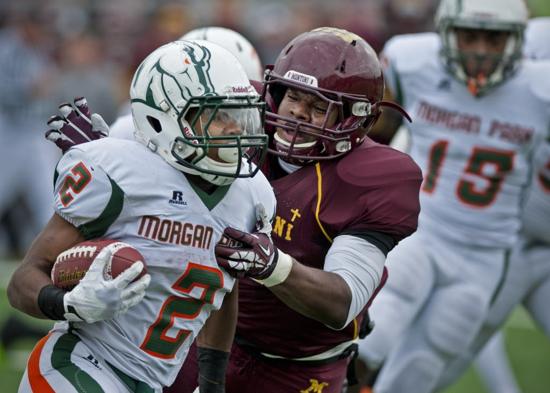 No wonder the Little Huskies youth football team went undefeated during its 2009 season.

Five members of that Oak Park-based club planned to sign Division I letters of intent Wednesday on national signing day.

The eighth-graders on the Little Huskies would become major contributors for three different playoff-bound high school teams in 2013, led by Montini linebacker Nile Sykes, who has verbally committed to Notre Dame. The 6-foot-1, 219-pound Sykes played three years at Oak Park-River Forest, then transferred in January 2013 and played his only season with the Broncos in the fall.

The other members of that Little Huskies squad who were projected to sign on Wednesday are Fenwick’s Robert Spillane (Western Michigan) and Ryan Smith (Miami, Ohio), and OPRF’s Simmie Cobbs (Indiana) and Jamal Baggett, who said he would decide Monday between Akron or Army.

Cobbs and Smith made their verbal commitments Sunday. Cobbs flipped from Purdue and changed to Indiana after taking a visit to the Bloomington campus on Saturday. Purdue recruited Cobbs as a safety, but Indiana offered him a chance to play wide receiver, his position with OPRF.

“I’m happy with Indiana,” the 6-foot-4, 207-pound Cobbs said. “I enjoyed myself there. It was hard to [change a commitment], but I feel more comfortable there.”

Cobbs lives in Oak Park with Spillane’s family and received an offer from Western Michigan, but never visited. He traveled Friday to Ball State, another Mid-American Conference school that extended a scholarship.

Cobbs said Indiana renewed its interest in him in the past week.

“I just wanted to evaluate everything as much as I can,” Cobbs said. “I know when I get to college I will be by myself.”

Spillane and Smith are cousins and will become the first grandsons of 1953 Heisman Trophy winner Johnny Lattner to play Division I college football. Spillane is a 6-2, 225-pound running back and the 6-5, 242-pound Smith is a tight end.

Fenwick defensive back Richard Schoen, who accepted Miami’s offer to be a preferred walk-on, visited the school with Smith last weekend.

“Coach Martin runs a similar offense to Notre Dame,” Smith said. “There are only a few other guys that run a lot of personnel [with tight ends].”