Despite a last-minute pitch by Army, the OPRF defensive back plans to sign a letter of intent with Akron. 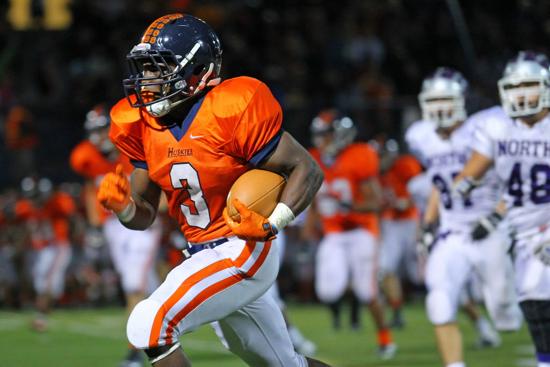 Oak Park-River Forest running back Jamal Baggett breaks away for a gain during a game against Downers Grove North. | J.Geil/for Sun-Times Media

Jamal Baggett’s next destination came down to family or comfort.

He went with the college that he felt fit him best.

The Oak Park-River Forest defensive back made a verbal commitment to Akron Monday and is expected to sign with the Zips Wednesday morning on the first day of the national signing period. Baggett chose Akron, which entered the recruiting scene late, over Army, where his cousin Terry Baggett led the Black Knights in rushing last season.

Terry Baggett, a graduate of Young, set a school record by rushing for 304 yards against Eastern Michigan.

“It was a tough decision. In the end, I have to do what is best for me,” said Jamal Baggett. “Army is a good school with a great coaching staff. Akron is a better fit for me.”

The 5-foot-10, 190-pound Baggett toured Akron two weeks ago and took his last visit before signing day to Army over the weekend. Jamal Baggett’s cousin, Lance Baggett, also is on the practice squad at Army.

Baggett said he received offers from other Mid-American Conference schools, but Akron heated up its recruiting after seeing video from his senior season.

“They immediately jumped on,” Baggett said. “I’m blessed they have given this opportunity to me. I’m happy. It’s a good opportunity.”

“The players seem happy out there. They really like to compete and get along well. The campus was beautiful in a downtown area,” Baggett said.

Baggett said he wants to study sports management or kinesiology.