Turner finished with 14 points and five blocks as Vernon Hills flipped a 35-32 halftime deficit into a 52-45 lead after three quarters. 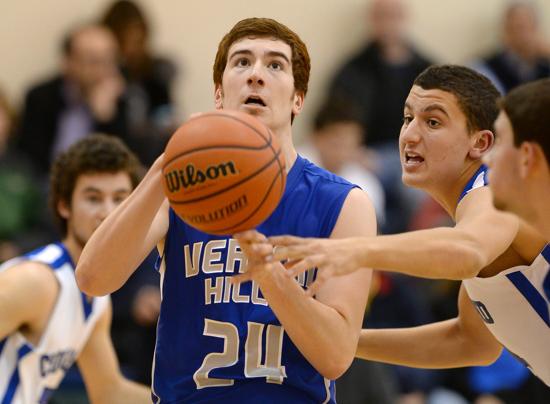 It’s been almost a month since Vernon Hills lost center Lem Turner to an ankle injury. He returned Thursday night, making a significant impact in the Cougars' win. Turner finished with 14 points and five blocks, disrupting the Tigers (11-4) offense, especially in the second half. Vernon Hills (12-9) wons for just the second time in eight games.

In the third quarter, Vernon Hills flipped a 35-32 halftime deficit into a 52-45 lead. A three-point shot from junior Sam Rattner (15 points) gave the Cougars a 46-45 advantage with three minutes remaining in the quarter, a lead they never relinquished. Vernon Hills clamped down on Tigers shooters, holding them without a basket for more than six minutes in the second half.

Senior Robbie Nardini. The Cougars' guard was on target for most of the night, finishing with a game-high 28 points on 11-of-18 shooting. Nardini played the point and off-guard with equal effectiveness.

Chicagoland Jewish struggled from the outside all game, finishing 5-of-19 from three-point range. Junior guard Josh Newlander led the team with 26 points.

“We didn’t play very well in the first half. We came out with a lot of energy [in the second half]. We really needed this win.” — Nardini