Get the latest recruiting news on the area’s top prospects, including Wheaton North quarterback and Northwestern signee Clayton Thorson breaking his leg. 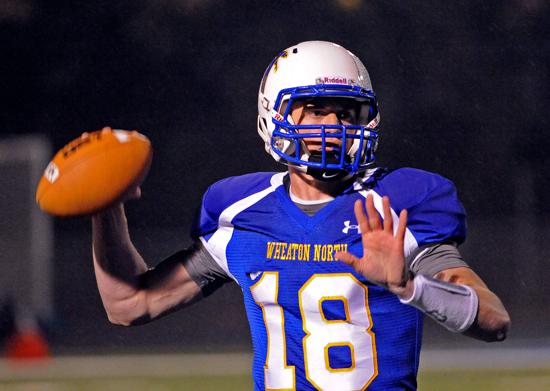 The 6-4, 200-pound signal caller is coming off a great offseason. He earned MVP honors at the Semper Fi All-American Bowl in Los Angeles in January.

Thorson is no stranger to rehabbing injuries. He missed the last part of his junior season with a broken collarbone.

Signing day has come and gone for the Class of 2014, and Jones decided to honor his commitment to Ohio State, but it was a tough decision.

“It was really hard,’’ Jones said. ‘‘I went on the visit, and I have gotten to know Michigan State’s coaches throughout the process, even before I committed the first time. So I had a really good relationship with them. It was a really hard choice.’’

But he’s happy to have his decision behind him.

“I was pretty relieved to get this whole process over with,’’ he said. ‘‘It has been long and stressful. But to know where I am going, it feels good. I am ready to come in and work hard and play in front of the fans at The Shoe. Go Buckeyes!”

Oak Park-River Forest wide receiver Simmie Cobbs slid under the recruiting radar early on. That changed midway through his senior season when he received an offer from Purdue.

Cobbs accepted the offer, but as signing day approached, interest in him skyrocketed and he picked up several additional offers — including one from Indiana. He took a visit and, before he left the campus, committed to the Hoosiers.

“The visit was awesome, and I had a great time,” Cobbs said. “The players were cool, and the community and campus were great.”

One of the main reasons that Cobbs decided to re-think his initial decision was Indiana’s offense.

“It is a spread offense, and they are a fast-paced offense,” Cobbs said. “It is similar to the offense we play at Oak Park-River Forest, so I already have a good feel for it.”