Kaneland's John Pruett scored 14 points in the fourth quarter and was a crucial 7-for-7 from the free-throw line in the final three minutes in a 71-65 win over West Chicago. 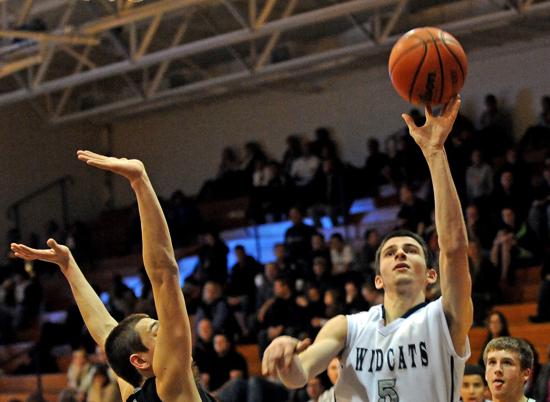 West Chicago star John Konchar is regularly posting 30 and 40 point- games, forcing scouts and college coaches to re-evaluate whether or not he's a Division I basketball player.

Kaneland senior John Pruett isn't worrying about where he'll be playing his college basketball. In fact, he kind of figures this could be his last two months as a basketball player.

"I'm just coming out hard to end my senior year," said Pruett. "This could be the last time I play basketball. It's the last time in high school for sure, I just want to give it my strongest effort."

Pruett's best effort propelled the visiting Knights over West Chicago 71-65 Tuesday. He scored 14 points in the fourth quarter and was a crucial 7-for-7 from the free-throw line in the final three minutes.

"I've been shooting really bad (from the free throw line) this year, like 60 percent," said Pruett. "I just tried to go up there with confidence."

Pruett finished with a game-high 27 points and eight rebounds, shooting 6-for-11 from the field.

Konchar did just about everything possible for the Wildcats (13-10). He filled up the stat sheet: 25 points, 14 rebounds, five assists, four steals and three blocks.

"We knew he was going to get his buckets," said Pruett. "(Konchar) is a great player and we just had to do our best to limit him."

Senior Drew David, who has played more varsity games than anyone in Kaneland history, scored 14 points. His steal with 21 seconds to play was the pivotal moment of the game.

The Knights (12-7) were clinging to a 68-65 lead and the West Chicago crowd was already visualizing Konchar draining a three to tie the game when David intercepted a pass and took it the length of the floor.

He was fouled on the layup and made both free throws, essentially sealing the win.

"That was just a huge, huge play," said Kaneland coach Brian Johnson. "Drew is the kind of guy that just steps up in those situations. He's the leader out there for sure."