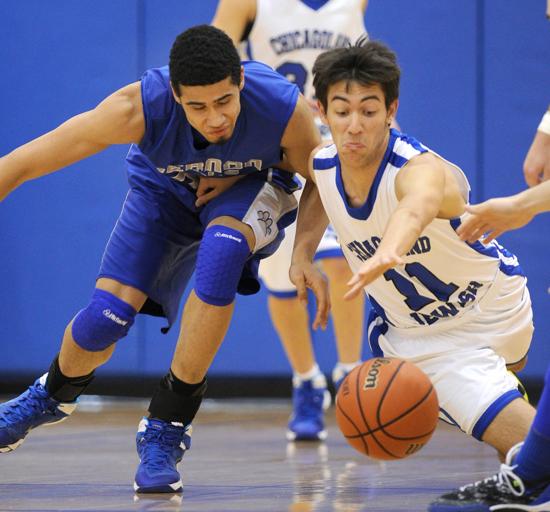 Minutes before that Feb. 6 meeting, the team had lost a 76-60 decision to Vernon Hills after leading 35-32 at the halftime break. It was the second time in three nights that the Tigers had blown a halftime lead. On Feb. 4, they took a five-point lead into the break on the road against Highland Park before losing 57-48.

“For some reason, the third quarter has been killing us,” Goodman said. “We talked about what we can do to come out with the same energy and same production.”

One year removed from a surprising trip to a Class 1A sectional final, Chicagoland Jewish beefed up its schedule in 2013-14. Nonconference games against schools with higher enrollments — Highland Park is a Class 4A school, Vernon Hills Class 3A — were scheduled to expose the veteran team to atypical competition and generate fan interest. Both games were played in front of packed houses.

Players admitted to having talked about the games for several months. They saw the Highland Park game as an opportunity to expand the program’s regional footprint.

“We want people to start thinking about us as a competitive team, for other schools to know that even though we are a 1A school, we will compete and we are up to the challenge,” Newlander said.

Newlander, a 5-foot-10 junior, is the Tigers’ best player. Against Vernon Hills, he was a force, finishing with a double-double (26 points, 10 rebounds). A gifted shooting guard with a point guard’s disposition, Newlander often battles with an identity crisis during games.

“I don’t know what to do to first, scoring or distribution. It’s hard. Sometimes they collide with each other,” Newlander said.

Coach Marty Dello added, “He’s the type of kid who can control a game and doesn’t have to score. He’s so unselfish, he had 26 [points against Vernon Hills] when he could have had 36.”

In the second half of Vernon Hills game, the Tigers went almost six minutes without scoring a basket. Newlander broke the drought with a three-point shot. When he turned to run back up the court, Halivni shouted words of encouragement.

This isn’t an unusual circumstance, as teammates feel compelled to remind the often benevolent Newlander when it is time to take charge.

“His natural instinct is to get guys involved. We’re always telling him to shoot,” Goodman said. “For the most part, he knows when to take over and when to get us involved.”

The Tigers will play mostly Chicago Prep Conference games the rest of the regular season. They believe the high-profile matchups — and players-only meeting — will have a long-term benefit.

“We want to put [Chicagoland Jewish] on the map as much as possible,” Newlander said. “We’ll get everyone together and figure out the next step.”