Leyden's Reba Hall and Erika Pimentel finished 1-2 at the Leyden Sectional to guide the Eagles to the title. 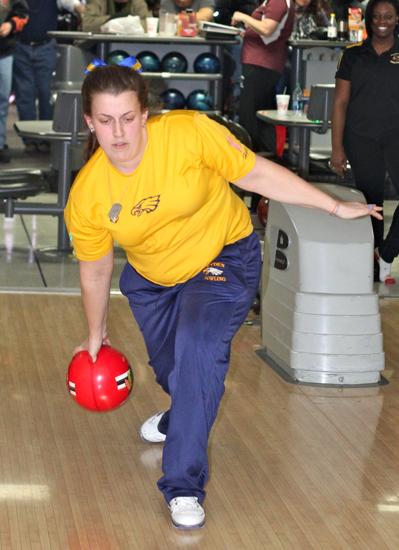 Saturday at Brunswick Zone in River Grove was a perfect day for Leyden’s Reba Hall.

The pièce de résistance, however, was Hall’s first game of the day, when she rolled a 300.

“I didn’t think it was going to happen and it’s really nice but I wish it would have happened next week [at State],” Hall joked. “I’ve shot one 300 before this but it wasn’t in a tournament so it didn’t count. Now I’ll get a ring because it’s certified. [On the last frame] I was shaking and I threw the ball a little inside so I was nervous but all the pins fell down.”

Hall embraced the accomplishment of sectional titles as an individual and with the team, even though it’s become commonplace.

“For me, it’s really nice because I won the sectional three out of four years I was in high school and the team won it all four years,” said Hall, who was ninth at state last year and third as a sophomore. “The past three months we’ve gotten really close as a team and that really helped out. We put up some big numbers.”

“My expectations were just getting the team to state,” Pimentel said. “I wasn’t trying to place individually. But I bowled well today and helped my team out.”

The top four teams advanced to the state finals, which start Friday at The Cherry Bowl in Rockford. Leyden is looking to improve on its seventh place finish from last year.

“We’ve had our eyes on next week for a while but we knew we had some good teams to get past [at sectionals],” Eagles’ coach Chris Aylward said. “It was a great day.”