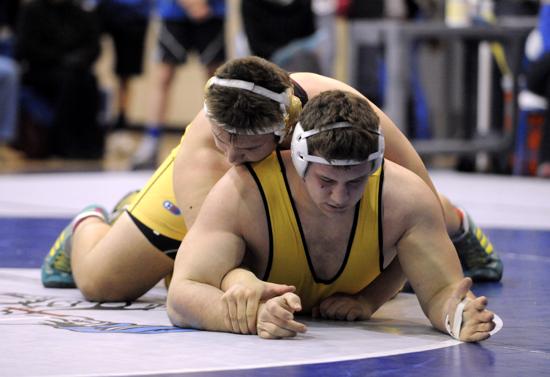 The majority of them involved Montini, which dominated the competition to win titles in nine of 14 weight classes.

“I think we were able to do so well today because we compete in the toughest tournaments, and have the toughest wrestling schedule out of any school in the state,” Broncos senior Edgar Ruano said. “In fact, there's really no one in the entire country who wrestles in as many tough events as we do. The quality of opponents we face consistently is about as good as it gets.”

Ruano’s title match against Wauconda's Nate Magiera in the 220-pound class may have been the day's best. Tied 1-1 with just 20 seconds left in the third and final two-minute period, Ruano (32-4 overall record) completed an aggressive takedown, stunning the near-capacity crowd.

It was the first loss all season for Magiera (44-1). The pair have a history.

"I beat him twice last year, once in the sectional final and again in the consolation match of the state semis," Ruano said. "So I finished third overall in 2A last year. But then I lost to him over the summer. I knew he was a tough kid. But even if I had lost, it doesn't matter to me. It's all about next week and being ready for downstate [in Champaign]."

One of the more emotional moments of the evening took place when Elmwood Park's Ben Vazquez (33-5) captured the 113-pound championship. With just 20 seconds to go, he executed a flawless takedown of Richmond-Burton freshman Gavin Sutton (37-3) to give him the crown. Moments later, in the hallway outside the gym, Vazquez burst into tears.

“I just went after his left leg, dove right in hoping for the best," Vazquez said of his winning move. "I knew I only had a little bit of time left. It was all adrenaline at that point. This is all I've wanted since I was 6 years old. I've waited for this [going downstate] my whole life.

"This means everything to me. This is dream come true. I've worked so hard for this."