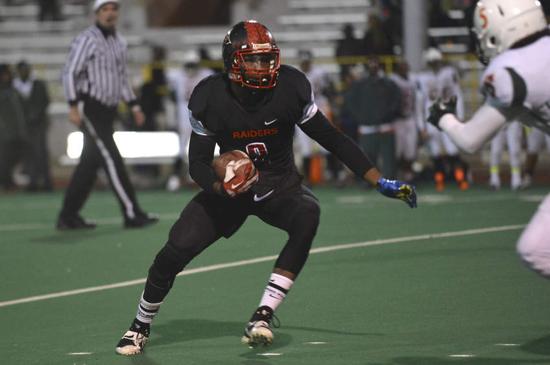 Raby senior quarterback Chris Covington was a late addition to Indiana’s Class of 2014, sneaking under the radar as signing day approached.

“Yeah, recruiting got crazy, but Indiana was my only love,” Covington said.

A couple weeks before signing day, Covington had been offered and had settled upon Indiana, but then the recruiting trail got crazy. Covington estimates he had 11 schools trying to change his decision on signing day.

“I knew that I was going to sign with Indiana on Jan. 31,” Covington said. “I knew I had the offer after the head coach (Kevin Wilson) called me. I was very excited.

‘‘When I committed I just said to the coaches I wanted to be a Hooiser. My favorite part of signing my letter of intent was watching my mom. She said she was proud of me.”

First offer in for Shutack

An offer is on the table for Nazareth junior offensive lineman Jack Shutack, and it’s from Western Michigan.

“I was on the phone with Coach [P.J.] Fleck and he just told me I had the offer,” Shutack said “I was surprised because I wasn’t hearing from them for a while then I just got offered.”

The first offer was special for the 6-6, 285-pound lineman, who was pretty happy about the news.

“It’s a great feeling to have someone notice your hard work,” Shutack said. “Hopefully this is the first of many.’’

“I was just out at Illinois for junior recruit day,’’ Williams said. ‘‘I liked the people, they are good people. I liked the atmosphere, it is a great university. I haven’t been able to visit Western Michigan or Akron yet.”

Recruiting is motivating the Scout.com three-star lineman to reach for more this offseason.

“I want to work harder to get more offers because more offers means more opportunities,” Williams said. “I’m thankful for the ones I have received.”

“I think Kentucky is an awesome place and special things are going to go on down there,” Boykin said. ‘‘As for North Carolina State, I would like to visit there when I get a chance.”