Maine West’s Brittany Collins was pulled from her last game one point shy of 2,000. “We stopped her at 1,999,” Maine West coach Derril Kipp said. “She’ll get to do it at home.” She did it Tuesday, scoring 23 points as the Warriors defeated Lane in a Class 4A regional semifinal. 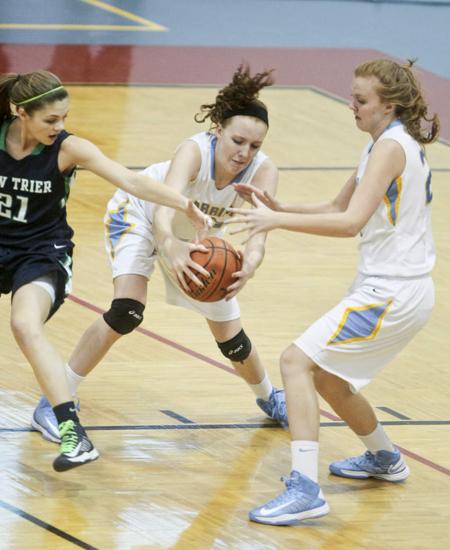 Great names in Maine West girls basketball history. Great players in high school and in college. But when it comes to scoring, none of them compare to Brittany Collins.

Earlier this year, Collins became the school’s all-time leading scorer when she scored 15 points to help the Warriors defeat Maine South 43-39. She eclipsed the record of 1,648 points set in 2005 by Megan Edwards.

And the 6-1 senior hasn’t stopped scoring. Her 20 points Saturday against Brooks left her one point shy of 2,000 for her career. She suspected she was close, but didn’t know how near until she was pulled from the game with a few minutes remaining.

“I never know how many points I have, and they don’t really keep me in the loop during the game,” she said.

Maine West coach Derril Kipp admitted afterward that he pulled Collins so she could get her 2,000th point at home.

She did just that Tuesday, scoring 23 points in Maine West's 53-36 victory against Lane in a Class 4A regional semifinal.

Few teams have had much success stopping Collins. She has played 117 games in her four-year varsity career and has reached double figures in points and rebounds 87 times. This season, she has scored 30 points or more five times.

She had a career high 38 points against Niles North earlier this year, and against Lane, broke the record for most points in a season (616), also set by Edwards in 2005.

“I haven’t seen anybody better than her, and we play pretty good teams,” Kipp said. “She works hard. She deserves everything she gets. She outworks most of the players she plays against. She can really shoot outside more than she does.

“She’s also very coachable. She gets beat up a lot but never complains. She just plays the game. She doesn’t really have an attitude toward anything on the floor except for playing the game.”

Collins, who will head to St. Xavier in the fall, credits her success to Kipp and her teammates.

“Coach Kipp taught me everything,” she said. “I wouldn’t be anything without him and my amazing teammates throughout the years who have helped me through it all. Everyone was involved. It was a team effort to get [the record].”

Collins said one of her joys playing basketball was being able to share the court with her older sister, Ashley, for two years. With Ashley away at college, Collins now turns to her two younger brothers, Jack, who will be a freshman next fall, and Sean, a sixth-grader, for a little driveway competition.

You would think that her two younger brothers would be willing to learn from their record-setting older sister. But boys will be boys.

But 2,000 points? Maybe if they start tomorrow.