Liam Nelligan back from Singapore for senior year at Benet 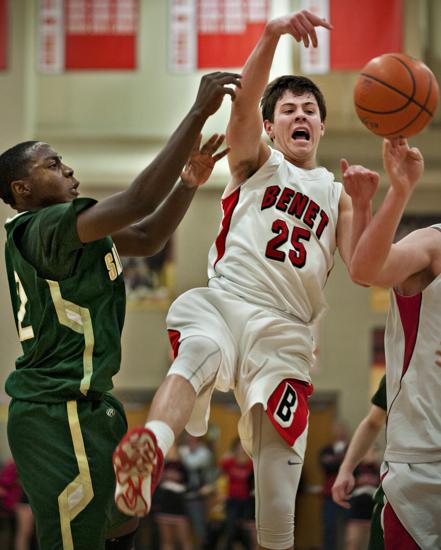 Liam Nelligan (25) of Benet loses control of a rebound as he is fouled by Isaac Moore (left) of St. Patrick. | Jon Cunningham/For Sun-Times Media

Liam Nelligan could have remained in Asia with his family, but it meant more to him to return to LaGrange Park for his senior year at Benet.

Nelligan spent his sophomore and juniors years attending school in Singapore. But before senior year, he wanted to head home to graduate with his class at Benet.

He had followed his four older siblings to Benet as a freshman, but his plans changed when his father was offered a position as the Asian division manager for Lisle-based Molex, an electronics components manufacturer. Joe Nelligan’s contract was for four years, which meant Liam and his younger sisters, Tess (now a junior) and Maeve (freshman), would attend school in the Far East.

Now he’s back with his mother, while his sisters remain in Singapore with their father.

The last two years were an experience unlike any other.

“When dad told me we were moving, it was quite a shock,” Liam Nelligan said. “Definitely the travel has been pretty cool. I’ve been to places like New Zealand and Australia and a lot of different Asian countries. I have met kids from different cultures. It’s all cool.”

Nelligan played American football, basketball and baseball for the American School in Singapore, which has an enrollment of around 1,400, he said.

He said that the quality of competition was not up to the level he experienced in the States.

Because of the limited competition in Singapore, his school took on teams whose players were children of military personnel stationed at American bases in South Korea, Japan, the Philippines and Indonesia.

“It was definitely a unique experience not many people can relate to,” Nelligan said. “It was fun. It was something I have not taken for granted.”

New Zealand was one of his favorite places to visit. He was able to tour the sites where the “Lord of the Rings” trilogy was filmed.

Now he’s playing basketball for the Redwings and plans to try out for the baseball team in the spring. The 6-foot-4 forward made the trip to his hometown Friday and helped Benet defeat Nazareth 66-45 in the East Suburban Catholic. Nelligan scored four points for the visiting Redwings (16-7, 4-2).

As a bonus, he also had the opportunity to see old friends, such as Nazareth seniors John Mazur, Kevin Connelly and Christopher Swade, who all went with him to St. John of the Cross in Western Springs.