The eight seniors on Rolling Meadows' girls basketball team wanted to make a statement Thursday night in their final home game ever. 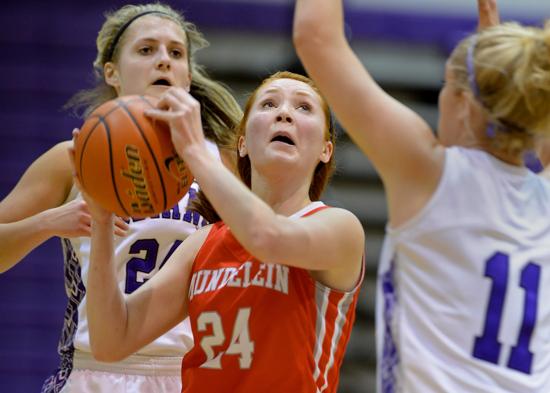 Mundelein's Madison Davis (24) looks to get up a shot over Rolling Meadows' Jenny Vliet (11) during the second quarter of Thursday's Class 4A regional championship game. | Brian O'Mahoney/for Sun-Times Media

The top-seed Mustangs (25-4 overall) pounded No. 8 seed Mundelein 83-29, capturing their own Class 4A regional crown in front of a large crowd.

"We always get such tremendous support from our fans, so to come out here one last time and win a regional in front of them was special," said senior guard Jackie Kemph (17 points, six assists). "I can't thank them enough."

St. Louis recruit Jenny Vliet scored 10 of her game-high 22 points in the first quarter, and connected on nine of her 10 field goal attempts. As a team, Rolling Meadows shot 56.1 percent (32-for-57), and got another 17 points from senior Alexis Glasgow.

Rolling Meadows' 23-4 lead at the end of one quarter ballooned to 26 points by halftime, then became a 44-point margin by the end of three.

"We definitely wanted to make a statement tonight and send a message," Vliet said. "It's kind of tough, because we know it's our last home game ever as seniors, but at the same time we're moving on to the next round. And that's what's most important."

The Mustangs will face the winner of tonight's Waukegan regional final between Hersey and Wheeling on Tuesday at 6 p.m., in a sectional semifinal. That game will be at Barrington High School.

As for Mundelein (20-9), coach Brian Evans was optimistic despite the tough loss. Mundelein was led by Jamie Hemmer's team-best seven points.

"Coming into this season, our two girls with varsity experience had never had more than a 10 or 11-win season, and they had 20 wins this year," Evans said. "They'd never been in a regional championship game. So those are all positive things to build on. The girls worked hard to get to this point, and they gave a great effort."