Deerfield senior Colton Emmerich hoisted one of his coaches into the air to celebrate his state semifinal win on Friday. The 182-pounder said it was the second best feeling in the world. 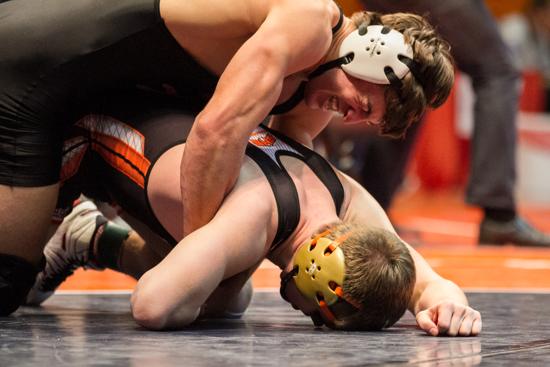 CHAMPAIGN — Deerfield senior Colton Emmerich hoisted one of his coaches into the air to celebrate his state semifinal win on Friday. The 182-pounder said it was the second best feeling in the world.

“Winning the state title, which I’m hopefully going to do (Saturday),” Emmerich said.

He’ll get his chance. Emmerich (46-1) meets Dundee-Crown’s Christian Brunner in the last championship match of the Class 3A state series on Saturday after topping Marmion’s Nathan Traxler in the semifinals.

“I can’t even put into words how this feels,” Emmerich said. “I’m trying to fathom it all. I still can’t believe I did that.

“Once I hit him in the lats in the first period, I had so much confidence and I knew I would win,” Emmerich added.

Libertyville’s Steve Polakowski, who failed to win a match in his first two state tournament appearances, also punched his ticket to the finals.

“Before it was I have to win, I have to win. Now it’s no matter what happens, the sun is going to come up,” Polakowski said. “So just keep wrestling and do it for fun. I’m having a lot of fun now and not worrying about it as much.”

The Libertyville senior downed St. Rita’s Colt Keilbasa to reach the semifinals and bested Marist’s Mark Duda, a three-time state medalist, for the second time this season to make the championship round.

“I trained with (Duda) a little over the summer, so I know what he likes to do and what he likes to hit, so I stayed away from that as much as possible and tried to keep the match in my hands,” he said.

It doesn’t get any easier for Polakowski (42-1), who meet’s Thornwood’s Kris Williams (30-0) in the finals. Williams, a junior, is one of the field’s better athletes and is aiming for his third state championship.

“He might be quicker, but I think I’m stronger,” Polakowski said.

Warren’s Emery Parker is another state finalist from the area. Parker (39-2) won a 6-4 overtime match over Marist’s Peter Andreotti.

"It's huge for me, huge for my program," Durbin said. "I'm so excited. I'm speechless about it. It's great."