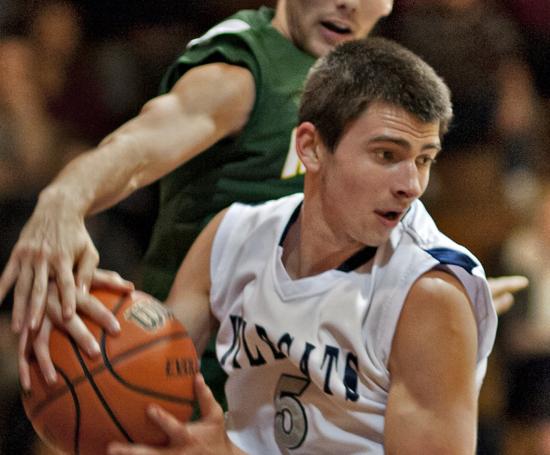 John Konchar did a little bit of everything to outduel Waubonsie's Jay DeHaan and lead the Wildcats to a thrilling 61-60 overtime victory.

Konchar (31 points) had 19 points by halftime, having scored 11 straight and 15 of his team's 17 points in a stretch from late in the first period to late in the second. With the score 30-21 at intermission, Konchar came close to outscoring the Warrior team.

In overtime, Michael Bibbs (10 points) may have had the biggest score, a three-pointer 32 seconds into the period that gave the Wildcats the lead for good. Konchar followed with two free throws, then fed Alex Mitchell for a bucket that put the Wildcats up 58-53. He would score his team's final points on a third-chance putback, rendering DeHaan's last-second trey meaningless.

"When they were guarding me tight, I would just try to draw the defense to me and pass it to my teammates for open shots," said Konchar.

DeHaan was magnificent in defeat. Like Konchar, his 31 points represented over half of his team's points. He had 13 points in the first 10:23 of the second half to rally his team to a 48-44 deficit. Then DeHaan and Matt Gialamas (12 points) both scored in the final two minutes to tie the score. Late three-point attempts by both Waubonsie's Nick Karkazis (10 points) and Konchar were off the mark, sending the game to overtime.

The Warriors gradually closed the gap in the second half by draping either Jack Cordes or Chris Karkazis on Konchar defensively. It worked, although at one point Konchar stepped out not far from half court and drained his lone three-pointer.

Konchar averages 28 points per game with a high of 49, but he was also a force on the boards. The 6-foot-4 senior pulled down 21 rebounds, eight on the offensive end that usually led to points.

The Warriors (17-8 overall, 8-4 conference) only placed four players in the scoring column.

"We talked about how it's nice to have a guy who can go for 30 points, but every time we've had a guy get 25 or more, we've lost that game," said Waubonsie Valley coach Chaz Taft. "And we made some mistakes on the defense end that we've been doing for four or five games now. We have to step up and do what the scouting report calls for."

The win improved West Chicago's record to 15-10 overall and 6-6 in the conference, and it avenged a four-point Waubonsie Valley victory earlier in the season when the Warriors 'held' Konchar to 15 points.