Marian Catholic utilized an all-around effort to pull away from Carmel in the third quarter Friday and win its seventh straight. 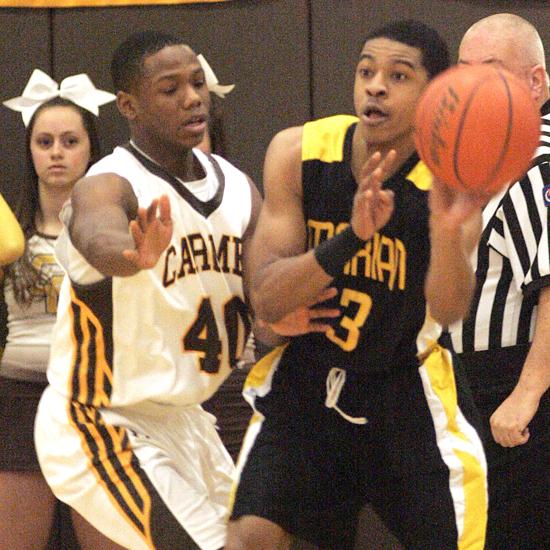 But after the game, at least 15 Carmel students walked up to Ulis and politely asked for pictures with the Kentucky-bound guard. A few moments later, a Carmel official approached a group of Marian Catholic coaches, wondering if the spectacle was normal treatment for the Spartans' star.

“It’s a circus,” one coach responded.

“We just turned it up defensively [in the second half] and got some steals,” Ulis said. “And then I was just being aggressive. Coach wanted me to come off of the screens and just shoot the ball.”

Led by senior center Jack George, Carmel came out of the gate strong, leading 22-16 midway through the second quarter. But a pair of 3-pointers by Ulis and senior Josh Cohn shifted the momentum to Marian Catholic. The Spartans took hold of that momentum and never looked back. They opened the second half on a 12-4 run and ended the third quarter on a 13-6 run.

“We didn’t control the ball enough,” George said. “We had way too many turnovers in the open court, which led to easy points for them.”

Marian Catholic coach Mike Taylor appreciated his team’s ability to take advantage of its athleticism in the second half.

“Our quickness takes over at some point,” he said. “We didn’t play good defense in the first half, but we were able to wear them down late with some big shots.”

And Ulis is no stranger to big shots. His 26 points came on 8-for-13 shooting from the field, and he hit a key pair of step-back threes late in the third quarter to extend the Spartans’ lead to 17.

“He’s pretty incredible; he’s going to Kentucky for a reason,” Carmel coach Tim Bowen said of Ulis, the 24th-ranked prospect in ESPNU’s top 100. “He’s been that way for four years. That didn’t surprise me tonight. I don’t think it surprised anyone.”

After shooting 71.4 percent from three-point range, Ulis insisted that he didn’t hear any of the Carmel students’ chants.

“I don’t really hear much of it,” he said with a laugh. “It’s funny sometimes, but I just try to keep everything out and zone in on the game.”

The Spartans, ranked fourth in the Sun-Times Super 25, will look to improve to 23-2 against Lake Forest Saturday.