Aaron Jordan scored 28 points in leading Plainfield East to its eighth win in 10 games and a 61-58 home win over Neuqua Valley Saturday. 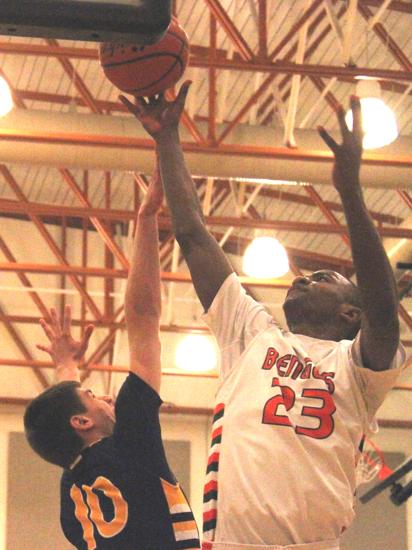 Plainfield East’s Aaron Jordan did his namesake proud, pouring in 28 points while powering Plainfield East to a 61-58 non-conference victory over Neuqua Valley Saturday in Plainfield.

The Southwest Prairie Conference champion Bengals won their eighth game in 10 tries and improved to 17-9. Neuqua Valley lost back-to-back games for the first time since November, falling to 19-8.

“We did some good things and Aaron made some shots early,” Plainfield East coach Branden Adkins said of Jordan, a junior. “We played to our strengths, overall. They are a good team and have beaten some good teams. I’m proud of our guys, especially winning on our home court.”

“We have things to work on,” Neuqua Valley coach Todd Sutton said. “We had two slow starts our last two games. The first two quarters, we had 10 turnovers and struggled to score.”

Trailing 5-0, Jordan hit a pair of three-pointers to give the Bengals a 6-5 lead with 3:33 left in the first quarter. Tyler Tesmond’s three-pointer late in the quarter staked Neuqua Valley to a 9-6 lead at the break. Elijah Robertson’s jumper pushed the lead to 19-15 midway through the second quarter. Plainfield East scored the next 10 points to force a Neuqua Valley timeout.

Elijah Goss’ steal and eventual layup gave the host Bengals a 25-19 lead with 1:53 left. Jordan’s third three-pointer allowed the Bengals to take a 30-24 lead and Robertson’s steal and two free throws with 7.4 left trimmed the lead to 30-26 at the half.

Jordan’s three-pointer to start the second half pushed the lead to 33-26. His driving layup with 1:40 left in the quarter pushed the advantage to 41-34. Plainfield East took a 45-38 lead into the final quarter.

“He was aggressive going to the basket and wanted the basketball tonight,” Adkins said of Jordan, who scored 18 of the Bengals’ first 33 points. “We want the basketball in his hands because he makes things happen.”

“We really have to stay focused especially at this time of the season,” Jordan said. “We have to finish games better.”

The Wildcats scored the first four points of the fourth. Demond George’s layup a minute into the quarter trimmed the lead to 45-42. Plainfield East scored the next six, the last two on a left-handed layup by Jordan, giving the Bengals a 51-42 lead with 5:55 left in regulation.

Leading 51-46, Plainfield East scored five straight to take its biggest lead of the game at 56-46 on Goss’ layup midway through the quarter.

Trailing 60-50 with 1:15 left, Neuqua Valley made one final push. Zach Incaudo’s basket from Connor Raridon with 33 seconds left cut it to 60-58. Raridon fouled out seconds later.

A pair of missed free throws gave the Wildcats a chance to tie or take the lead. However, a missed shot, rebound and free throw ended the scoring.

“We had a great shot to tie it,” Sutton said. “We got a little 5-footer in the lane. I’ll live and die with that. We played great the last three minutes.”