A year ago, Lake Forest's boys swim and dive team captured a sectional title in thrilling fashion, edging out NSC rival Libertyville in the final race. On Saturday, the tables were turned. 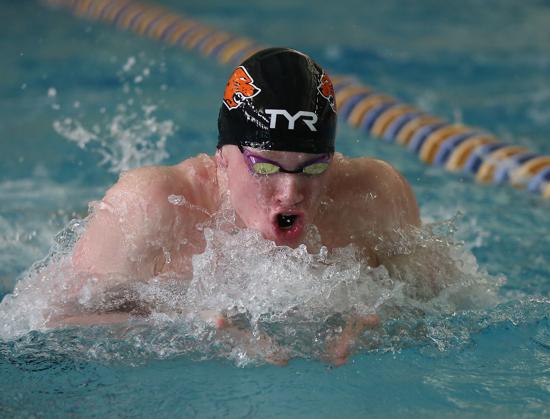 On Saturday afternoon, however, the tables were turned.

This time, Libertyville (294 points) walked away with its own piece of hardware, downing the runner-up Scouts (275.5) to win the Saturday’s Lake Forest Sectional. Afterward, the Wildcats were in celebration mode.

"It's pretty amazing," Libertyville senior Alex Snarski said. "Last year, it came down to us and Lake Forest in the final relay. If we had won that final relay, we would've won the meet. They out-touched us in that, but this year feels a little bit like redemption because we also get to move on to state.

"As a team, we got fourth overall [downstate] last year. Everyone who scored points for us last year is returning this year. So I think we can only move up from fourth. Our goal is actually to win a state title. I think the way we performed today, it's very doable."

Snarski's mark of 49.55 seconds in the 100-yard backstroke shattered the Scouts' pool record and was a personal best. He and teammates Bobby Snader, Justin Fu and Matt Harrington were also victorious in the 200 medley relay for Libertyville.

Plenty of other records fell.

There were heart-pounding finishes, too.

In the 500 freestyle, Libertyville's Pat King stunned the near-capacity crowd by posting a 4:46.62, which was a meager two-tenths of a second faster than Lake Forest's Michael VanAntwerp (4:46.83), who came in second.

Though he didn't qualify for an individual event at next weekend’s state meet in Evanston, Antwerp's teammate, junior Scott Bennatan, is enjoying the postseason experience.

"I still get to go downstate with my teammates, but this was one of the most exciting meets I've been part of," Bennatan said. "The fans were all noisy and really into it, and so many races came down to the wire."

Warren finished third overall with 203 points, while Mundelein (171), Vernon Hills (141), Waukegan (58) and Zion-Benton (50.5) rounded out the top seven. Seven other schools (six from Lake County, one from McHenry County) had individual event participants.