The record book is getting a makeover. Lake Forest’s Regis Durbin became the first state champion in program history, while Colton Emmerich earned the first title for Deerfield since 1964. 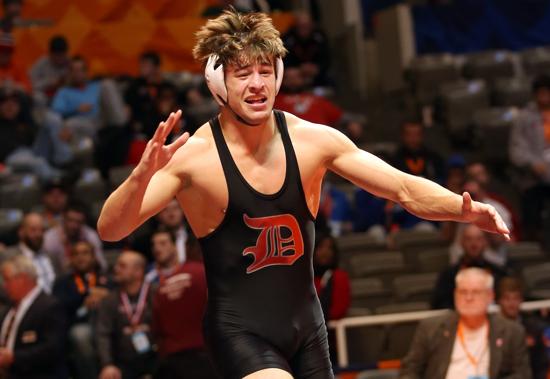 CHAMPAIGN — The record book is getting a makeover.

“I never thought I would have this feeling,” Emmerich said. “I still don’t know if this is really life or if I’m dreaming, but I love it.”

“Hopefully there are many more champions (from Deerfield) to come,” Emmerich said.

In the only 3A title bout featuring unbeaten wrestlers, Durbin (41-0) defeated Lockport’s Tyler Johnson (51-1) for the 195-pound crown. It was a stalemate throughout, but Durbin managed an escape in the ultimate tiebreaker for a 3-2 overtime win.

“I couldn’t really get my offense going, so I was making sure there was no way he was taking me down,” Durbin said.

Wauconda’s Nate Magiera (48-1) was another champion from the area and defeated Montini’s Edgar Ruano (35-5) for the 220-pound champion in 2A. Magiera was dynamite, rolling to a 17-4 win.

“We definitely had a game plan coming in,” Magiera said. “I remember coach (Tom) Nance saying to me in the background, ‘If you have a shot early, take it.’ I saw the shot and took it right away. I think that was one of my big things — I wanted to be more aggressive.”

“As hard it was right after the loss, this is something special to be a part of no matter how it ends,” Polakowski said. “I’m really glad I got the opportunity for this.”

Medalists out in force

Libertyville’s Kayne MacCallum (43-2) took bronze after topping Lincoln-Way Central’s Bryce Gorman (44-2) with a takedown in overtime at 170. It was revenge for MacCallum following a December loss to Gorman in the finals of the Hoffman Estates Invite.

Chris McDermand, fourth at heavyweight, and Joey Gunther, sixth at 152 pounds, made it four placers for Libertyville.