Just moments before Libertyville senior Steve Polakowski was to wrestle his Class 3A state semifinal match Friday in Champaign, a memory popped into his head. 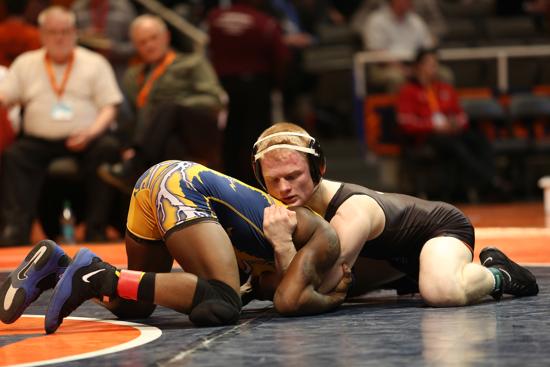 Just moments before Libertyville senior Steve Polakowski was to wrestle his Class 3A state semifinal match Friday in Champaign, a memory popped into his head. It was something his coach, Dale Eggert, had told him recently.

“Right after the sectional meet [Feb. 15 at Barrington], Coach Eggert told me, ‘It would be cool if I was marching you in [to the state finals],’ ” Polakowski said. “I knew I wanted to get there.”

After defeating Marist senior Mark Duda by a 5-3 decision, Polakowski earned his spot in Saturday’s 120-pound final. That meant he’d be led into the arena by Eggert, selected as a Grand Marshal for the tournament by the Illinois High School Association. Grand Marshalls lead the 84 individual finalists around the floor at Assembly Hall before championship matches begin in a display of uniformity and sportsmanship.

Once the march ended, Polakowski was the lone Wildcat to wrestle, completing a record-setting weekend for the Libertyville program.

Battling two-time champion Kris Williams of Thornwood, Polakowski knew he would have to wrestle the match of his life to win. He came up just short, with Williams winning the title bout 2-1.

“He’s a bit more athletic, and I knew scoring was going to be hard,” Polakowski said. “I knew I had to hit a bit harder, keep up with his speed and try and outsmart him.”

As expected, the match was a defensive stalemate. Neither wrestler scored on his feet, including the first 60-second overtime period.

In the first session of a second overtime consisting of back-to-back 30-second periods, Williams broke a 1-1 tie with a one-point escape. In the bottom position for the second session, Polakowski had to stand up and escape or lose the match. Williams managed to keep him down and rode out the final seconds.

“Points were not easy to come by with that much experience and that much athletic ability,” Eggert said. “[Polakowski] was right there with a three-time state champion. Could have gone either way.”

Since the season started in November, Polakowski was single-minded with his goal to win a state championship. To fall short was devastating.

“It was a rough night,” he said. “It was hard to come that close. To not get a takedown and lose on the mat, it was an unbelievable disappointment at the time. But we put on a good match. It’s something to be proud of.”

His second-place medal marked the highest finish of four Wildcats on Saturday. At 170 pounds, senior Kayne MacCallum lost to eventual champion Davonte Mahomes of Oak Park-River Forest in the semifinals, then won two matches in the wrestlebacks to take third place. Senior Chris McDermand (285) also lost in the semis to the eventual champ, Moline’s Adarios Jones, before finishing in fourth place. At 152, senior Joey Gunther earned a sixth-place medal.

The four all-staters broke the school record of three set in 2004.

“Like I said last week, this is our year,” Eggert said. “It was a great day.”