Martez Cameron scored 23 points to help De La Salle upset Mount Carmel in the Catholic League title game and earn tournament MVP. For his accomplishments, Cameron was has been named Chicago Sun-Times Athlete of the Week. 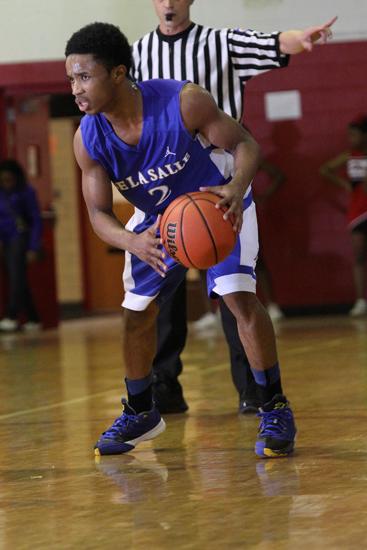 On Saturday at Chicago State in the Catholic League tournament championship, everything went Martez Cameron’s way.

His shot was pure and clean and he scored easily in transition. “The whole scenery was different than what we’re used to, the rims, the floor, and the size of the court, and I saw I had to step it up,”said the junior De La Salle guard.

Cameron’s strong first half play gave his teammates an opportunity to get more comfortable. With Cameron, Karl Harris and Paul Zabilevicius leading the charge, the No. 25 Meteors stunned the No. 10 Caravan 67-62.

Cameron matched his season-high with 23 points and was named the tournament most valuable player. “I deserved it,” he said after the game. “I worked very hard for this.” Cameron said.

For his accomplishments, Martez Cameron is the Sun-Times Athlete of the Week.

Cameron’s run capped an extraordinary week as the Meteors defeated three ranked teams in Mount Carmel, No. 13 Fenwick and No. 15 Loyola.

Cameron picked the right time to play what he called “my three strongest games of the season.” The games defined who he is as a player. “My strengths are being a floor general, pushing the tempo, catching people off guard or getting them in foul trouble, knocking down open shots and getting the ball to the open man,” he said.

Cameron is averaging 14.2 points, five assists and three steals for the suddenly smoldering Meteors (13-10). He has found his niche at the South side De La Salle. White elevated him to the varsity his freshman year and he is now a two-year starter.

He grew up in suburban Westchester, but knew his hometown Catholic school, St. Joseph, was loaded at the guard position. “They already had a lot of the top guards from the 2015 class, [Jordan] Ash, Glynn Watson, and I thought if I went there, we’d just all be fighting for the ball. This is the best school for me.”

Early on, Cameron played the facilitator who was learning the point guard position. ‘‘My freshman and sophomore years, we had [Michigan State recruit] Alvin Ellis, and he was a big scorer, so I really didn’t need to score that much,’’ he said. “Now I have to be one of our go-to scorers.”

He is drawing recruiting interest from American University and has also received inquiries from the likes of Iowa, Xavier and Butler.

Cameron is most excited about De La Salle playing its best basketball with the Class 4A state tournament starting next week. The Meteors now rate as a dangerous No. 7 seed in the loaded Marist Sectional that features top-ranked Curie and Public League and Catholic League powers Young, Simeon, St. Rita and Mount Carmel.

“Winning the Catholic tournament is going to show we never give up,” he said. “We played a lot of nationally ranked teams at the beginning, and we just keep [playing] and keep our composure. We know anything can happen.

“Just go back to practice, work hard and get the job done.”