The Class 3A Lincoln-Way West Sectional is one of the toughest in the area and will be a battle between Joliet Catholic, Hillcrest, Morgan Park and Bishop McNamara. 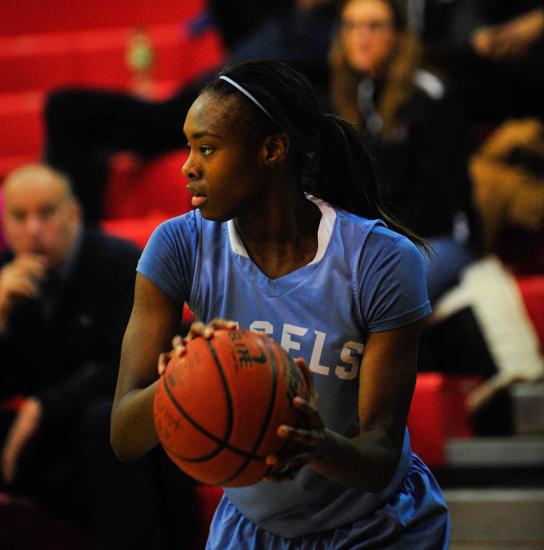 The regional seeding committee got it right.

Now it’s up to Joliet Catholic, Hillcrest, Morgan Park and Bishop McNamara to decide which No. 1 is the real thing.

The four teams, with a combined 91-14 record, are coming together for a Class 3A sectional doubleheader Tuesday at Lincoln-Way West.

Jasmine Lumpkin and Joliet Catholic (24-2) will play Shami Goodman and Morgan Park (21-4) in the 6 p.m. opener, followed by Tanzania Sherrill and Hillcrest (24-3) vs. Khadaizha Sanders and Bishop McNamara (22-5).

Based on rankings and previous results, Joliet Catholic would be the favorite. But ...

“We are operating with a suppressed excitement and determination,” Angels coach Ed Schodrof said. “We respect Morgan Park, Hillcrest and Bishop McNamara. We are all battling for something special.”

Joliet Catholic is rebounding from a stunning 69-46 loss Feb. 12 to Marian Catholic. The Angels rolled past Providence 50-30 behind 20 points from Nicole Ekhomu in the Morris Regional title game.

“The Marian Catholic game improved our next five practices. It sharpened our focus,” Schodrof said. “We are locked in with the game at hand; we don’t discuss the future.”

Morgan Park did some rebounding as well, recovering from shocking 81-78 loss to Brooks in a Public League semifinal to smash the Eagles in Friday’s Julian Regional final 74-38 as Goodman had 28 points.

Hillcrest advanced via 56-48 over Rich South in the Rich East Regional final. Sherrill (16 points) and Shayla Joyner (14) were a 1-2 punch as the Hawks avenged last season’s regional loss to the Stars.

“We are a confident team,” Hawks coach John Maniatis said. “This is a group that has been willing to do everything possible to realize victory. It has been more than effort. The effort has been united with a sense of purpose and direction.”

Bishop McNamara captured its own regional, beating Peotone 56-30 for the title.

Evergreen Park advanced after beating Bogan 52-46 in a game that extended over two days. Thursday, the power went out in Evergreen’s gym with two minutes remaining and the Mustangs leading by three points. After a 11/2-hour wait, the game was suspended and completed Friday.

“We were actually warming up, had flashlights shining on the baskets thinking the lights were going to come back on,” Mustangs coach Bruce Scaduto said. “It was kind of funny in a way, a little different, something I’ve never experienced.”

Nicole Larkin finished with 16 points for Evergreen, which defeated the No. 1 seed.

De La Salle is on a roll, wining the GCAC White Division championship and then cruising by Raby in its own regional final 73-58 behind Akilah Fletcher’s 23 points.

“Our seniors have been leading us pretty well,” De La Salle coach John Smith said. “They’ve been playing above my expectations right now, which is a good thing knowing that these seniors had it in them to play at a higher level.”