Oak Lawn and Marian Catholic will lock horns in a battle for the Class 4A Bloom Sectional Thursday. Marian’s Ashton Millender and Teniya Page lead their Spartans against LaTondra Brooks and her Spartans. In Class 3A action, Joliet Catholic faces Bishop McNamara for a third time. 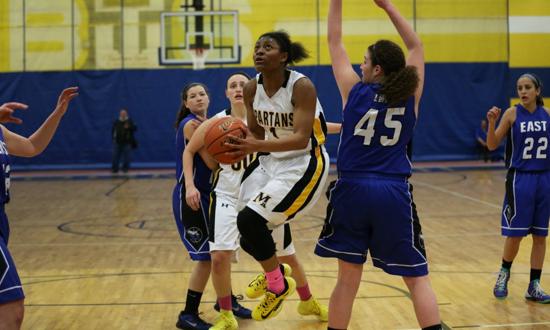 There probably still are doubters out there who think Oak Lawn isn’t for real.

Marian Catholic coach Dan Murray isn’t one of them.

“Oak Lawn is very good,” he said on the eve of their collision in Thursday’s Class 4A Bloom Sectional final. “They are very active on the boards, have some shooters.”

And their point guard, LaTondra Brooks?

“She’s as good as we’ve seen,” he said. “She is quite the talent. It will be a big challenge, hopefully, one we are ready for.”

There’s no looking ahead for the defending state champion Spartans (25-4), who survived Lincoln-Way East’s best shot in a 61-51 semifinal win.

The title game figures to be a backcourt battle between Brooks and Marian’s Teniya Page, both of whom stepped up Tuesday when it counted most for their teams.

Page, who spends as much time feeding the ball to Ashton Millender as she does taking it in herself, crushed East’s hopes after it rallied to within five points with two minutes remaining.

First, she drove to the basket, was fouled and hit two free throws. The next time down the floor she swished a 14-foot pull-up jumper.

Page had 20 points and Millender 16, while Gabrielle Cooper hit two three-pointers in the third period that helped jump-start the Spartans toward a big lead.

Marist made it difficult for Oak Lawn before Brooks excelled at crunch time.

It was 55-53 with just under two minutes remaining when Brooks made a prolific block on what appeared to be a runaway layup by the RedHawks. She then made a steal and drove for a basket. Brooke Annerino and Jannah Mahmoud also scored in the final minute to preserve a 61-56 victory.

“It was great to see everyone on the floor step up and have a part in winning that game instead of them looking to LaTondra to take things over,” Oak Lawn coach Janet Meyers said. “They kept their composure and recovered from some costly turnovers.

“Marian will be our biggest challenge of the year. That being said, we are playing our best basketball right now, so we are excited about it. We have to play good defense, contest shots, protect the seams and hold them to one shot.”

The Class 3A Lincoln-Way West Sectional final features the third meeting of the season between Joliet Catholic (25-2) and Bishop McNamara (24-5).

In the Rich South Galaxy title game, Nicole Ekhomu and Jasmine Lumpkin had 19 points each as Joliet Catholic romped 85-46. In the rematch Jan. 15, the Angels cruised 62-43.

The Fighting Irish do have one of the top players in the state, however, in Khadaizha Sanders. In Tuesday’s 79-68 victory over Hillcrest, she totaled 31 points and 10 assists.

“I don’t tie this to the other two games,” Joliet Catholic coach Ed Schodrof said. “It’s one game, one night and we’ve got take it to them.”

The Meteors got 19 points from Akilah Fletcher and 10 points and nine blocks from Chardanae Hamilton in their 61-55 semifinal win over Harlan. The Meteors will have to find a way to stop Phillips guard Sheree English, who had 31 points in the Wildcats’ 45-39 win over Evergreen Park.

“We’ve been able to kind of jell as a team and get into a good rhythm,” De La Salle coach John Smith said.

“I think the conference tournament helped us to know what playing with pressure is like. That gave us some momentum, and with our senior leadership we’ve been able to get things rolling.”