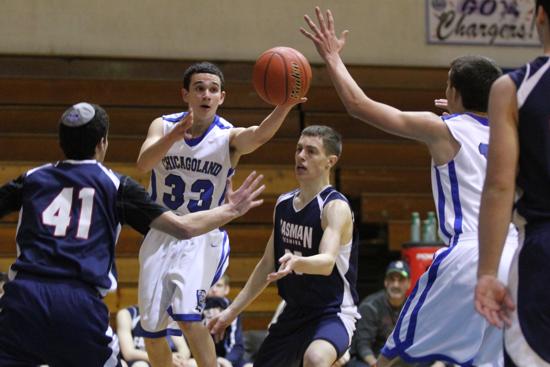 ARLINGTON HEIGHTS — Yeshiva point guard Shlomo Ashkanazy was tossing perfect passes the length of the court and teammate Dovy Klein was running under them for easy, wide-open layups on Wednesday night.

Until Chicagoland Jewish put a stop to it.

The top-seeded Tigers trailed Yeshiva by two points after one quarter of their Class 1A regional semifinal game, but turned things around in a 57-45 win.

“They were running a nice back pick and we had to get our kids on the same page against it,” Tigers coach Marty Dello said. “Once we made the adjustment, we settled down. I was happy with our shot selection and happy with the way we ran our offense after that.”

The top-seeded Tigers will play for a regional title against the winner of Thursday’s game between No. 2 Ida Crown and No. 3 host Christian Liberty Academy. The regional final is scheduled for Saturday.

“I hope we play Ida Crown,” Tigers point guard Jeremy Goodman said. “We know all of those guys really well and that game would pack this place.”

Goodman, Avidan Halivni, Nathaniel Moses, and Joshua Silverman all finished in double-digit scoring for the Tigers and keyed a swarming defensive effort that forced Yeshiva turnovers during an 11-0 third-quarter run.

The Tigers led 28-23 at halftime and 45-32 after three quarters in the win over Yeshiva, which was led offensively by Ashkanazy and Klein with nine points apiece. Yeshiva led 15-13 after one quarter.

“They beat us by 30 the first time we played them this year, so we were much better tonight,” Ashkanazy said. “We fell apart a little bit in the third quarter but they’re really fast and they’re a really good team, so give them credit.”

Yeshiva coach Ira Shyman liked what he saw from his boys despite the loss.

“When teams have pressured us, we’ve had trouble getting open this year,” Shyman said. “But we played them close to even for all but three minutes of the third quarter. But my kids never quit.”