The three Public League teams have been reinstated to the Class 3A state playoffs. 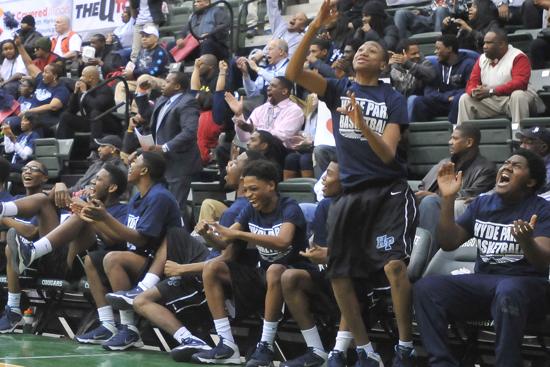 Hyde Park's bench cheers after tying the game in the in the fourth quarter. | Worsom Robinson/For Sun-Times Media

The Illinois High School Association reinstated Bogan, Hyde Park and Uplift to the Class 3A state playoffs on Thursday, but the teams will have to play without their head coaches.

IHSA Associate Executive Director Kurt Gibson sent out an email Thursday afternoon stating that the three schools were back in the playoffs and the Vocational and Antioch Sectionals would be restored to their original pairings.

The schools violated IHSA rules on the number of games that can be played in the season. They were removed from the playoffs by the IHSA on Monday.

They were reinstated after an appeal was considered by the IHSA Board of Directors Thursday afternoon. The three head coaches (Bogan's Arthur Goodwin, Uplift's David Taylor and Hyde Park's Antonne Samuels) are suspended for the entire playoff run.

“After thoughtful and deliberate consideration the board ultimately felt that a scheduling error by the coaches and administration was not a severe enough infraction that it should result in the team losing the opportunity to play in the postseason," Gibson said in a statement.

Uplift is 23-4 and received the No. 2 seed at the Class 3A Antioch Sectional. The Titans are scheduled to open the playoffs against the winner of Northtown and Senn on March 4.

Bogan is 24-4, ranked No. 9 in the Super 25 and received the top seed at the Class 3A Vocational Sectional. The Bengals start their playoff run on March 4 at the St. Laurence Regional.

Hyde Park is 19-9, ranked No. 20 in the Super 25 and received the No. 2 seed at the Class 3A Vocational Sectional. The Thunderbirds are scheduled to play the winner of Johnson and Comer on March 4 in the Julian Regional.