When Chicagoland Jewish junior Josh Newlander went down with a foot injury this season, the Tigers lost one of the top Jewish underclassmen in the country, according to Jewish Hoops America. 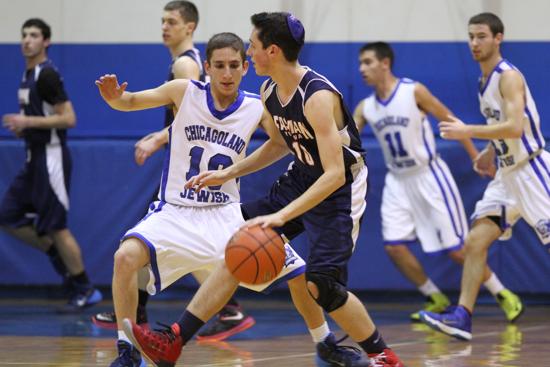 ARLINGTON HEIGHTS — When Chicagoland Jewish junior Josh Newlander went down with a foot injury this season, the Tigers lost one of the top Jewish underclassmen in the country, according to Jewish Hoops America.

“He’s the best all-around player on the team, a great defender, scorer, and maybe the best rebounder on the team,” the Tigers’ Jeremy Goodman said. “We couldn’t replace him with one guy. Two or three guys have had to step up.”

According to maxpreps.com, Newlander leads the Tigers in four statistical categories, with 15.6 points, 4.9 rebounds, 3.4 assists and 2.3 steals per game.

Filling Newlander’s big shoes has required more than one set of feet for the Tigers.

“We’ve had people step up,” guard Joshua Silverman said. “We have a history of injury on our team so we all kind of know when we have to step up and what roles we have to fill.”

“We usually play [Goodman] off the ball but he has had to play strictly as a point guard now,” Tigers coach Marty Dello said. “And a lot of the set plays we ran for Josh, now we’re running for other guys.”

Both Silverman and Goodman have had to take more shots to pick up the scoring slack. Silverman buried a pair of 3-pointers and finished with 10 points in the 57-45 win over Yeshiva, while Goodman also netted 10 points.
Nathaniel Moses led the Tigers with 12 points in the win, and another Tiger has stepped up his game in Newlander’s absence.

“Avidan [Halivni],” Silverman said. “He’s been scoring big points for us in the last two games.”

Halivni finished with 10 points against Yeshiva.

Newlander was in street clothes for Wednesday’s win and while he’s chomping at the bit to return, he said he’s proud of what his teammates have done without him.

“It’s a very strong-willed team and I know they’ll never give up,” Newlander said. “Jeremy is one of our best ballhandlers, he has confidence, and he’s just figuring out when and where to take the ball.”