Ethan Sansone is looking to end his career by winning a third straight championship with his Wheaton Co-op teammates. He’s become more of a team leader as his career has gone on and looks to teach his younger teammates how to handle success. 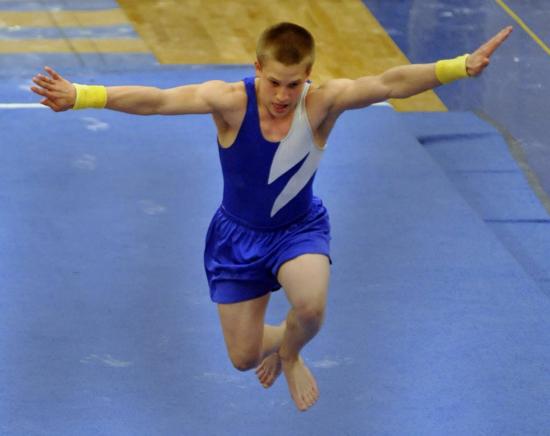 It was three years ago when a quiet freshman, Ethan Sansone, joined the Wheaton Co-op boys gymnastics team.

Now, a second-place finish and two state titles later, he’s getting ready to finish what has turned into quite a remarkable high school career.

“It’s pretty crazy how fast things have happened,” he said. “It seems like I was just walking in as a freshman. I’ve gotten better and better and now I’m ready for this year to see what this team can do.”

Sansone competed in everything but the still rings during his freshman year to help a senior-laden team place second in the state.

During his sophomore year, he placed fourth in the All-around with a 53.65 and helped the team win a state championship.

Last year, he was seventh in the All-around with a 53.85 and had his best finish in the individual event championships, tying for second place on floor with a 9.65.

Overall, he has placed in the Top 10 on pommel horse, high bar and floor exercise the last two seasons, and added a fifth place finish in vault last May.

“He’s had a great career and he grew a lot from freshman to sophomore year,” Wheaton Co-op coach Greg Gebhardt said. “He was our leading All-arounder when we won that first title and he rose to the occasion last year. He has the potential to be a real tough All-arounder again and come out strong.”

While Wheaton North may be known for churning out NFL quarterbacks, including Kent Graham and Chuck Long, it’s also produced some of the state’s best gymnasts, including Kyle Padera (2005) and now Sansone.

“It’s been great being a part of some strong gymnastics teams,” he said. “Now that it’s my last year I’m going to do everything possible and not going to hold back. I’m trying to pass on the legacy that we teach here.”

Despite his significant prior achievements, Sansone said that he and his teammates are still hungry for more success, including the possibility of a third consecutive state title. He’s grown from the quiet contributor to a true leader.

“I love teaching the kids about discipline and that if you want something you need to work hard so you can get it,” he said. “I’ve always felt comfortable here and I think as a freshman the senior role models taught me. Now I’m playing that role and I really enjoy it.”

But he’s not letting that enjoyment get in the way of success either.

“A lot of guys who have success get a little complacent,” Gebhardt said. “Ethan’s more driven this year than ever before.”