Hampshire and Burlington Central are playing in different regionals for the first time since 2007-08. 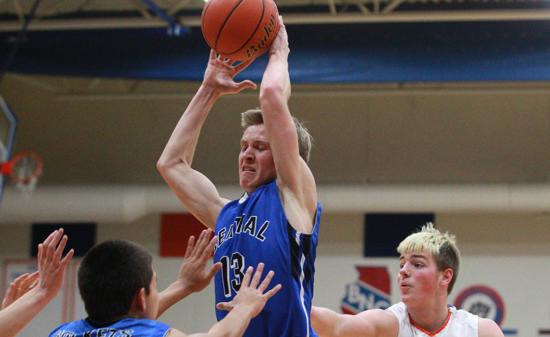 For the first time since 2007-08, Hampshire and Burlington Central are headed their separate ways in the postseason.

Playing in different regionals will not make it much easier for the two as Hampshire opens Tuesday as the second seed in the Class 3A Woodstock Regional. The Whip-Purs have lost to third-seeded Woodstock twice, and it’s a regional with one of the area’s hottest teams, top-seeded Marengo.

Third-seeded Central (18-8), meanwhile, starts 3A Genoa-Kingston Regional play Wednesday against second-seeded Wheaton Academy (19-8) — which went unbeaten in the Suburban Christian Blue and easily could have been a top seed.

“I don’t know (if) there’s many five-team regionals around that can say they’ve got as many wins as ours, and maybe not that many six-team regionals have as many wins,” Central coach Brett Porto said. “I know down by Peoria, (Bartonville) Limestone’s is tough in 3A. But this field could be as good as anyone’s.”

The five teams have a combined 85 wins, led by top-seeded Sycamore (20-7), which beat the Rockets. Central (18-8) looks for its first regional crown since that 2008 year when it played in 3A and Hampshire was in 2A.

The Rockets missed a chance at a share of the Big Northern East title Friday by losing to conference champs Richmond-Burton, and have gone 5-4 since their 13-4 start.

Guard Reed Hunnicutt (12 points) and 6-9 center Duncan Ozburn (9 points) lead the Rockets, but balance has been the norm with six at 5.4 points or higher.

“I don’t know if that’s ideal,” Porto said. “A lot of coaches might like for that one or two players who get in the 15 to 20 range to make life easier, but for us this year, this is definitely what works. The guys buy into our team concep, and we’re at our best moving the ball to a lot of different hands.”

Wheaton Academy is capable of playing this way. The Falcons have 6-10 junior Chandler Fuzak and his 6-7 sophomore brother Bennett, plus 6-8 senior Gordon Behr, to make if difficult inside for Ozburn, who has a chance at 100 blocked shots this year. High-scoring guard Josh Ruggles has led an offense that’s let Wheaton Academy win 10 of 11.

The Woodstock Regional’s top seed, Marengo (19-10), is looking for its first title since Roger Cannon’s 2000 club, but Hampshire and guard Ryan Cork have shown the capability to challenge, as well.

“We didn’t play Marengo, Harvard (11-17) or Marian Central (15-15), but played the Woodstock teams twice and the thing you really fear is you don’t want to play a team a third time,” Hampshire coach Bob Barnett said.

So the Whip-Purs face the Woodstock-Woodstock North winner on Tuesday. Those schools split during the year with each other, but Hampshire lost twice to Woodstock.

“Marengo definitely looks the best right now,” Barnett said about an Indians squad with five straight wins, including one over 4A Crystal Lake South.

While Cork (15.8 points) and Matthew Bridges (15.2) have led the team throughout, it’s going to be up to some younger players like freshman Brennen Woods, junior Austin Speath and 6-6 sophomore Dan Duchaj to step up with both Woodstock (13-14) and Marengo possessing taller front lines.

“The young guys have improved as you can tell by our 3-8 start and we’ve won 10 since then,” Barnett said. “Anything can happen in this regional.

“It’s like they always say, you just want to win to advance, but I always call it survive and advance.”