Athlete of the Week: John Konchar

West Chicago’s John Konchar put the finishing touches on a remarkable regular season Thursday against St. Charles North. The senior forward had 45 points, 15 rebounds and eight assists in an 89-82 victory. For his efforts, he is the Sun-Times Athlete of the Week. 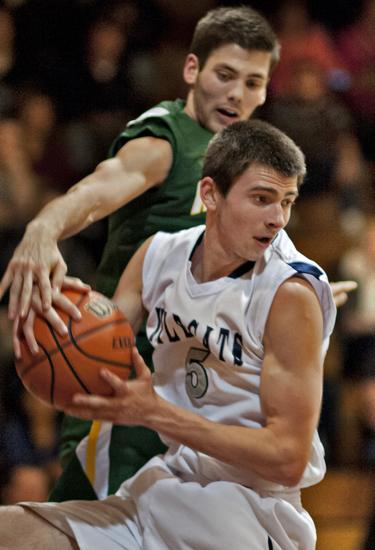 John Konchar had a chance to reinvent himself this season. The senior was a two-year starter who put up impressive numbers in losing struggles for West Chicago, which had gone a decade without a winning season.

“We went two or three years without even winning a conference game, and I wanted to come out strong,” he said.

West Chicago shifted to the Valley division of the Upstate Eight. “We were in a new conference, and other teams would have known about me, but they wouldn’t have seen me.”

What an entrance he made.

In West Chicago’s final regular-season game against St. Charles North in an Upstate Eight crossover, Konchar put the finishing touches on a remarkable individual season. He registered his third 40-point game of the season, scoring 45 points and adding 15 rebounds, eight assists and two blocks in an 89-82 road victory.

For his accomplishments, Konchar is the Sun-Times Athlete of the Week.

“He’s the best all-around basketball player I’ve seen this year, whether we played them or not, and we’ve seen a lot of teams,” St. Charles North coach Tom Poulin said. “He can do everything and he thinks [about] the game at an adult level.”

Konchar also achieved a significant personal record against the North Stars. By drilling a three-pointer from the left baseline early in the second quarter, he became the leading scorer in program history, breaking the previous mark of 1,461, held by his own coach, Bill Recchia, who graduated in 1983.

On the season, Konchar scored at least 30 points in nine games and has 1,491 career-points.

“It’s a big honor,’’ he said. ‘‘I’m speechless about it. I didn’t think I’d get it before the year, but I worked very hard on my game over the summer and I improved on a lot of things.”

Most importantly, Konchar has achieved his personal numbers within the context of a winning program. His averages of 29 points and 15 rebounds helped the Wildcats to a 16-10 mark heading into their Class 4A regional game against Prosser Monday night at Leyden. It is the Wildcats’ first winning season since 2004-05.

Recchia returned to his alma mater last year in the hopes of reviving the program. Konchar averaged 19 points and nine rebounds as a junior.

“His maturity on the floor and off, and his leadership skills are beyond words,” Recchia said. “His court vision and ability to distribute the basketball while putting up the numbers he has is pretty amazing.”

Konchar said he worked hard over the summer, playing with his own team and the Naperville-based club program IBA, with top players from the western suburbs such as Benet’s Sean O’Mara and West Aurora’s Jontrell Walker.

“Just playing with the great competition, it really helped me out a lot,” Konchar said.

Not surprisingly, his college recruiting has begun to heat up. Northeastern, Rider, Hartford and a top Division II program, Notre Dame of Ohio, have all expressed interest.

“He’s deserving of a Division I school,” Recchia said.

The Wildcats are a No. 11 seed in the loaded Bartlett Sectional. Konchar is ready to go out on a high note.

“We’re all excited about the regionals, and hopefully we’re going to surprise some teams and win a regional,” he said.