With Glasgow injured, Kemph leads Rolling Meadows back to state

The Northwestern recruit suffered a broken nose in the second quarter of Monday's Class 4A supersectional against New Trier. 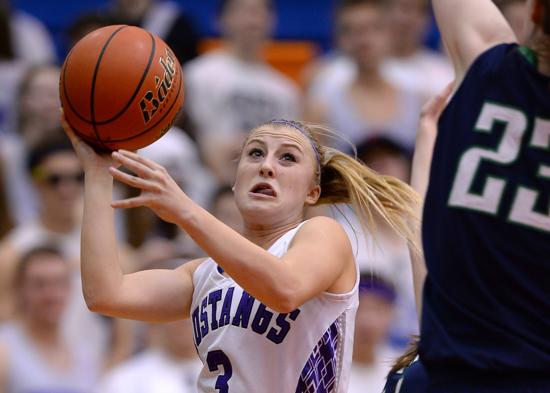 HOFFMAN ESTATES — Not even a busted nose to one of its best players could knock out Rolling Meadows on Monday in the Class 4A Hoffman Estates girls basketball supersectional.

The Mustangs lost senior guard Alexis Glasgow for the game when she suffered a broken nose midway through the second quarter, but they still won a return trip to the state tournament with their 60-43 victory over New Trier.

Rolling Meadows coach Ryan Kirkorsky said he received word in the fourth quarter that Glasgow, a Northwestern recruit, officially was ruled out for the rest of the night.

"I was told if she plays, that could make it worse," Kirkorsky said.

Senior guard Jackie Kemph shouldered the scoring load, going for 19 of her game-high 25 points in the second half. She hit a 3-pointer and an acrobatic layup to start the second half and suddenly the Mustangs were up 35-17. The lead got as big as 20 in the third, and the Mustangs (28-4) didn't let the Trevians (27-5) get closer than 16 over the final eight minutes.

Rolling Meadows, which returned all five starters from last season's Class 4A runner-up team, led 13-10 after the first quarter. Kirkorsky attributed the small lead to a lack of familiarity with the opponent.

"It was a process of feeling them out," he said.

New Trier coach Teri Rodgers said her team got some good looks, but the shots weren't falling for the Trevians.

"We started pressing a little bit," she said. "It happens some nights."

Rolling Meadows plays Geneva at 6:30 p.m. Friday in the state semifinals at Redbird Arena in Normal.