Geneva led the entire game en route to a 64-58 win over Plainfield East at the Class 4A Plainfield East Regional Wednesday. Nate Navigato led the Vikings in scoring with 17. 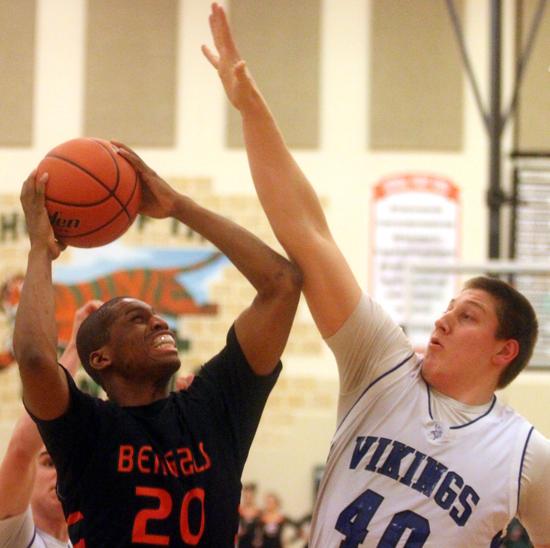 Geneva led from start to finish and was nearly perfect at the free-throw line during a 64-58 Class 4A Plainfield East Regional semifinal win over the host Bengals Wednesday in Plainfield.

The win puts Geneva among the finest boys basketball teams in school history.

“This is a team who has battled a lot of adversity this season and has had a lot of success,” Geneva coach Phil Ralston said. “The last time a Geneva team won this many games was 50 years ago and that team went downstate. We’re hoping to give Bolingbrook the best game we can Friday night.”

“I’m excited and I know the rest of the team is,” senior guard Cam Cook said. “Our goal this whole season is to win a regional. We’ve waited all year for this, we’re ready and I think we can get the W.”

Wednesday, the Vikings placed three players in double figures in Nate Navigato (17 points), Cook (15) and Chris Parrilli (11) and made 23-of-27 from the free-throw line to dispose of pesky Plainfield East (19-10).

“I liked how our kids handled their business, especially when it got tight,” Ralston said. “We’ve got some kids who can shoot free throws and they did a good job with that tonight.”

“We practice a ton of free throws in practice so when it comes down to it in games, we’re ready,” Cook said.

“We couldn’t get over the hump, but I give our guys a lot of credit,” Plainfield East coach Branden Adkins said. “They gave everything they possibly could and we were outsized in a lot of positions.”

Geneva scored the first seven points of the contest and led 12-7 at the quarter and 27-25 at the break.

Plainfield East junior Aaron Jordan collected two points on two shots and two fouls in the first quarter and sat on the bench because of foul trouble for most of the second. Pace Temple, Dan Santacaterina and Parrilli were responsible for keeping Jordan in check in the Vikings’ diamond-and-one defense.

Plainfield East scored nine straight points over the next 90 seconds, the last two on Jordan’s steal and slam with 3:14 left, trimming the Vikings’ advantage to 56-54. Jordan hit two free throws with 38.4 remaining to cut it to 59-58. Parrilli hit 4-of-6 from the line in the final minute to seal the deal.

“Last year, we had a down year compared to the prior year,” Adkins said. “This year, these guys put us back on the map and I think we’re here to stay.”