Hales swingman Tim Robertson scored 15 of his team-high 19 points in the first half and added nine rebounds, three steals and a block as the Spartans galloped past Perspectives-MSA 69-55 in a Class 2A Robeson Sectional semifinal Wednesday night on the South Side. 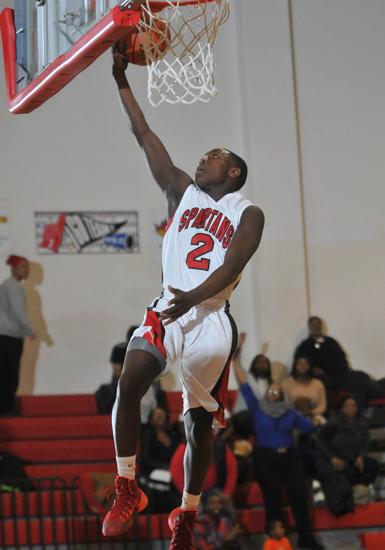 Tim Robertson has a stealthy quality to the way he plays basketball.

He knows how to float between spaces and get to a prime spot. “I am not very tall and I am not going to jump over people, but I know how to get where I can be effective out there,” he said.

The 6-2 Hales swingman scored 15 of his team-high 19 points in the first half and added nine rebounds, three steals and a block as the Spartans galloped past Perspectives-MSA 69-55 in a Class 2A Robeson Sectional semifinal Wednesday night on the South Side.

“Tim is our energy guy and he definitely sparked us,” Hales coach Gary London said.

London burned a quick timeout after the Wolves scored on four layups to start the game. “We had no help-side defense,” he said. “It is one thing if one guy gets beat, but we had four guys getting beat off the dribble at the start.”

“Coach told us never to underestimate an opponent, it’s March Madness, and we had to go out and be aggressive and be able to slow them down defensively,” Robertson said.

Junior Spartans guard Joe Larry scored eight of his 13 points in the first half. He had four steals as Hales’ ballhawking defense registered nine first-half steals as the Spartans leapt out to a 41-27 lead at the break. Six different Hales players scored in the first half.

The Wolves (15-14) were in historically uncharted territory, accomplishing something the Anthony Davis-led teams never achieved by playing in their first sectional in the program’s seven-year history.

Juvon Turner, an athletic 6-5 wing forward, scored a game-high 20 points and added nine rebounds and two blocked shots despite playing in near-permanent foul trouble for the Wolves. He keyed an impressive comeback as MSA sliced a 17-point deficit to six points (55-49) with just over three minutes remaining.

Two plays altered the destiny of both teams as Turner was called with a player control foul trying to maneuver for an inside post play. On the ensuing possession, Hales’ lefty junior guard Dominic Christian (12 points) converted a three-point play through contact at the rim.

Worst of all, Turner fouled out and Hales recorded back-to-back steals that Robertson and Larry registered consecutive layups off for a 7-0 run in 18 seconds that swung momentum decisively back to the Spartans.

“Basketball is a game of runs, and we’d gotten into an offensive slump there where we didn’t value our offensive possessions and they got back into the game,” Robertson said.

“The team plays off my energy, and I was not ready for this to be my last game.”