Rolling Meadows guard Jackie Kemph has won 97 games and scored more than 2,000 points in her career. The 5-6 senior can now add Sun-Times Girls Basketball Player of the Year to her list of accomplishments. 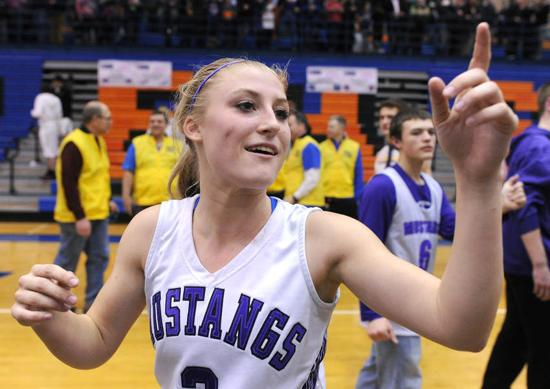 “After we beat Fremd [in the sectional final], we came in the next day for a little light practice and a bunch of shooting contests,” Rolling Meadows coach Ryan Kirkosky said. “We knew the kids were exhausted.

“But Jackie was completely consumed with winning. She was keeping track of how many shots everybody was making. That’s how competitive she is. Everything she does, she wants to win. It’s her competitiveness that sets her apart.”

Kemph has won one more contest this season. The 5-6 senior guard and two-time all-area selection has been named the Chicago Sun-Times 2013-2014 Player of the Year.

Kemph admits she has always been competitive. It’s a by-product of being a twin. She and her sister Allie, also a guard at Rolling Meadows and Jackie’s doubles partner in tennis, have been competing against each other most of their lives.

“We always played the same sports, we always wanted to be better than the other one,” Jackie said. “We’re pretty even in a lot of stuff.”

Is there anything Allie does particularly better?

“She got a better ACT score,” Jackie said. “That hurt a little.”

Jackie Kemph has been a four-year starter at Rolling Meadows, winning 97 games and scoring more than 2,000 points in her career. She has scored 679 points this season including 27 in a 63-56 road win at Quincy Notre Dame and 26 in a victory over Neuqua Valley.

“We didn’t expect to lose Lexi [Alexis Glasgow, who suffered a broken nose in the second quarter],” Kemph said. “But everybody stepped up. I just knew that I had to be aggressive and take the ball to the rim.”

Kemph and her sister are two of eight seniors on the Rolling Meadows roster. Jackie, Glasgow and Jenny Vliet have been together on varsity for four years. Vliet and Kemph will be teammates next year, but Glasgow is headed to Northwestern. The other seniors are scattering to parts unknown.

“It’s sad,” Kemph said. “It’s hard to believe these four years have gone by so quickly. I hope we all stay close. I think we will. I don’t think things will change much.”

One thing could change. Kemph will be taking her skills to St. Louis University next fall. Her sister has not decided on a college. If Allie goes elsewhere, it will be the first time the pair will be apart.

“I’m not sure what it’s going to be like because we’ve been together our whole lives,” Jackie said. “It will be a big change. I’m sure we’ll miss each other, but I think we’ll be able to adjust.”

But you can bet there will be at least 11 coaches in the Mid-Suburban League and scores of coaches throughout the state who won’t miss Jackie Kemph at all.