Loyola prevailed over Maine West with a 70-64 overtime victory to win the regional championship. The win advances top-seeded Loyola to the Maine South sectional, where it will face longtime rival New Trier on Tuesday night. 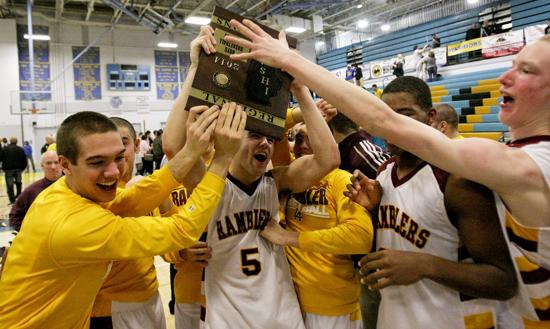 Headed to overtime in the Maine West regional final, Loyola coach Tom Livatino didn’t yell and scream at his team. He didn’t give them a motivational speech, either. Instead he told them that he had confidence in their abilities, and that if they played to their highest level, they’d end the game with a trophy.

The Ramblers listened to their coach and did their job, taking control in the extra period to prevail with a 70-64 overtime win over the host Warriors to win the regional championship. The win advances top-seeded Loyola to the Maine South sectional, where it will face longtime rival New Trier on Tuesday night.

“I kind of took a step back, and they delivered,” Livatino said. “I just didn’t screw it up.”

Loyola (23-5) led for the majority of the game, and appeared to pull away with a 14-4 run at the end of the first half to give it an 11-point lead at the break. Maine West’s Jamal Sherman had other plans, almost single-handedly leading his team back early in the third quarter with a blazing shooting display. Sherman, who played just two minutes in the first half because of foul trouble, scored 11 points in the first 2:30 of the third quarter, hitting several long three-pointers to spark the Warriors attack.

Sherman saved his most heroic play for the end of regulation. Down by two with 7.8 seconds to go, the senior forward grabbed a rebound off a missed Loyola free throw and went coast-to-coast, laying the ball in with 1.4 seconds remaining to tie the game at 59-59. It was the first time Maine West hadn’t trailed since it led 4-3 two minutes into the first quarter.

“We executed our stuff better,” Maine East coach John Bongiorno said about the strong play in the second-half. “It’s like anything else, you start executing better, you’re going to be successful.”

The team’s strong play didn’t continue into overtime, as the Ramblers followed their coaches advice and played to their highest level. Jack Morrisey (18 points) and James Clarke (17 points) both hit jumpers at the start of the extra period, and the Loyola defense locked down, keeping the Warriors off the scoreboard until there was just 40 seconds remaining in the extra session.

“Down the stretch, it was really nerve racking. (The Warriors) have some good players who made some big shots,” said Clarke, holding the piece of net he cut down following the victory. “To win the regional championship – our senior class has never won it – so it means a lot. But we have more ahead of us.”

The Ramblers, who went 11-of-18 from the free-throw line in the fourth quarter and overtime, know they must play better if they want do cut down another net next Friday.

“We haven’t played New Trier since Thanksgiving, and that game went to overtime,” Livatino said, referring to the 65-59 Ramblers win on Nov 27. “It’s going to be a tremendous high basketball environment. Both teams are different, but New Trier is obviously very good.

“Our guys are excited for the challenge.”