Erasing the bitter memory of last year's playoff collapse on its home floor against the same Chicagoland Jewish team, Mooseheart rolled to the school's first sectional title, 50-35 at the Class 1A Serena Sectional final. 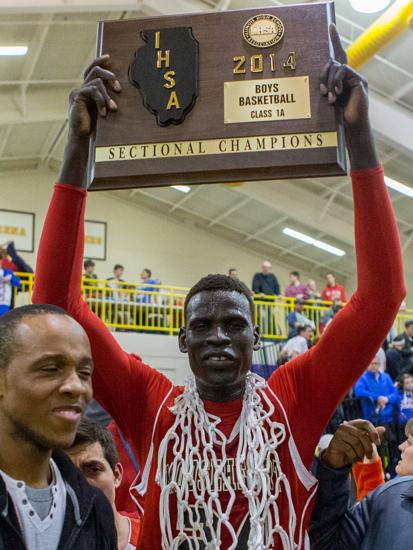 Mooseheart's Mangisto Deng (24) holds up the championship trophy after the Ramblers defeat Chicagoland Jewish 50 to 35 in the Serena 1A Sectional championship. | Sean King / For Sun-Times Media

Erasing the bitter memory of last year's playoff collapse on their home floor against the same Chicagoland Jewish team, the Red Ramblers rolled to the school's first sectional title, 50-35 at the Class 1A Serena Sectional final.

"One of my kids said it best: We left with broken hearts last year," Mooseheart coach Ron Ahrens said. "We focused all year on wanting to play Chicagoland Jewish. We wanted to play them. There was no motivation I had to give."

Mooseheart had never won so much as a regional until last year. What the program lacks in tradition it more than makes up with size.

Specifically, that would be the towering trio of 7-foot-1 Akim Nyang, 6-10 Makur Puou and 6-7 Mangisto Deng, who came from war-torn Sudan to the small school between North Aurora and Batavia in May 2011.

They dwarfed an opponent whose tallest starter is 6-2.

Puou alone had 27 points, 14 rebounds, and 4 blocks, 8 points coming in a first quarter that saw Mooseheart roar out to a 16-2 start.

The Tigers (15-9) chipped away at the lead, getting to within 30-20 midway through the third quarter on Josh Newlander's fourth three-pointer.

It never got closer.

Puou scored 11 of his 27 in the fourth quarter, turning away Tiger hopes for a rally to match last year.

Mooseheart advances to play Eastland in a Tuesday supersectional in DeKalb.

"It's great, so great. We've been working so hard for this," Puou said. "This is for the fans who came out to support us."

Newlander scored 19 for the Tigers.