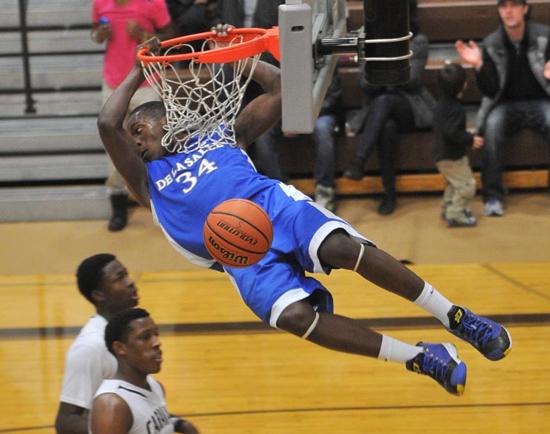 Playing hard with a non-stop motor will get you places. It certainly has for De La Salle’s Brandon Hutton.

After playing out his junior season for the Meteors, which ended with a regional title game loss to Whitney Young Friday night, Hutton ended his recruitment on Sunday. The athletic 6-5 forward visited Iowa this past weekend and committed to coach Fran McCaffery and the Hawkeyes.

It was McCaffery and the atmosphere he's created in Iowa City that drew Hutton to the Hawkeyes.

"It was coach McCaffery that really separated Iowa from the rest of the schools that were recruiting me," says Hutton. "He gives all his players opportunities, from the freshmen to the seniors. Plus, there is a family bond there. You can just see it."

De La Salle coach Tom White knows exactly what Iowa and McCaffery are getting from his junior star.

"Iowa is getting a live athlete with great grades and someone who loves to play," says White. "Right now he can go out and defend any position on the floor. He's a gym rat who's just going to get better."

Long known for his aggressive, relentless style of play, along with his explosive athleticism off the floor, Hutton grabbed the attention of high-major programs with his play this past summer on the AAU circuit with the Illinois Stars. His athleticism, toughness and defensive intensity stood out.

He then showcased and solidified himself in open gyms this past fall, which netted more high-major interest. In the month of October alone, Hutton received offers from Iowa, Wisconsin and West Virginia, which followed up several mid-major offers.

"I know coach McCaffery and all Iowa fans are going to get 110 percent from me in every game I play," says Hutton of what he will bring to the Iowa program. "I will bring energy and will guard anyone."

With a combination of strength, athleticism and high-level energy, Hutton is at his best finishing around the rim, both on the offensive glass and in transition. The question now is whether or not he can evolve into more of true hybrid forward rather than simply an undersized 4-man.

"He's been working on that a lot," says White of his star player's continued perimeter development. "That was his goal coming into the season, transitioning from an interior player to a 2 [2-guard] or 3 [wing] type. But that takes time. It's not something that is going to happen in six months, but he's works at it and he is clearly better when it comes to those types of skills."

Hutton is among the top dozen prospects in Illinois in the Class of 2015.

From the big prize still remaining (Bryce Hopkins: Is a decision looming soon?) to overlooked and under-recruited p… https://t.co/egTrr83s7u

RT @michaelsobrien: It's just one month from Signing Day. Here's a look at where recruiting stands. @joehoopsreport breaks down: -The big…