“If I’m coaching against Maine East, he’s the guy I prepare for," Blue Demons coach Dave Genis said of junior. "He’s a monster." 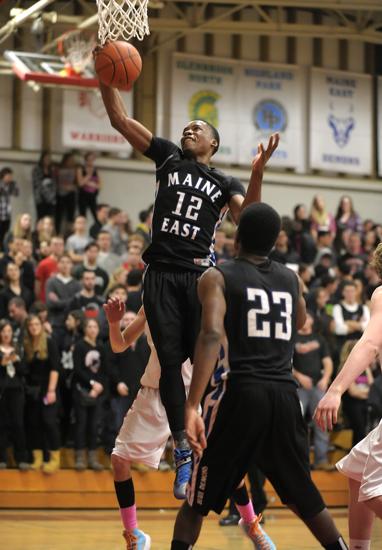 Ezeka Omeke is well aware of the recent evolution of the Maine East boys basketball team.

A starter since his freshman year, the 6-foot-4 junior forward has been part of a program that has improved each year he’s been on the team. The Blue Demons experienced their biggest jump this season, finishing 10-17 overall. That’s twice as many victories as they had during the 2012-13 campaign. Maine East went 9-10 after a 57-38 loss to Highland Park on Dec. 20, 2013.

Maine East’s season came to an end March 4 with a 51-44 loss to Notre Dame in the Class 4A Maine East Regional semifinals. Omeke finished with 15 points.

Omeke has one more chance to help deliver the Blue Demons that elusive regional title, and he said he believes the team is close to reaching that goal. Maine East has won only four regional championships in program history, with the last coming in 2008.

“The first two years we really didn’t have that much skill or talent,” said Omeke, who was the Blue Demons’ lone player selected to the all-CSL North team and the first in four seasons. “We just went, played and tried our best. Now, we have a lot more skill and talent. We had sophomores and juniors who stepped up.”

Omeke was one of three juniors in the starting lineup for the playoff game, and he figures to be the centerpiece for next season’s squad.

Maine East coach Dave Genis said Omeke started to realize his potential midway through the season. A weekend performance in early February might have provided a glimpse of the future.

Omeke totaled 35 points and 30 rebounds in back-to-back games against Highland Park and Hoffman Estates. The Blue Demons beat the Giants 48-45 on the road Feb. 7 before losing to the Hawks 64-62 at home the next day. Highland Park won a regional title Friday.

“That’s something we’ve been waiting for from him,” Genis said. “If I’m coaching against Maine East, he’s the guy I prepare for. He’s a monster.

“He’s a great rebounder, and he’s gotten better at finishing around the basket, like a true post.

“That weekend is when everything came to a head for him. It was like the light bulb went off.”

Omeke is expected to be paired again next season with junior guard Abby George and junior forward Nick Kanjou. Genis said George, who scored 15 in the playoff loss, is an all-conference-caliber player. The coach said Kanjou, who transferred from Niles West in the fall, is someone who will benefit from a full year with the team.

“It’s exciting to think about our potential, but there is work to be done,” Genis said.